A Pakistani general says more than 100 troops have been buried by an avalanche in the disputed Kashmir region.
Pakistan army spokesman Major General Athar Abbas told the BBC some bodies had been recovered but could not say how many had survived.
The avalanche hit a military camp near the Siachen glacier in the Karakoram branch of the Himalaya mountains. A rescue operation is underway.
India and Pakistan both claim the area and have deployed thousands of troops.
Long rescue mission
The avalanche struck the base in the Gayari district at about 06:00 local time (01:00 GMT).
The soldiers are from the Northern Light Infantry regiment, trained in mountain operations, including avalanche rescue.
The military says its "priority is to save lives", and helicopters, sniffer dogs and troops have been sent to the area to help with the rescue.
The BBC's Orla Guerin, in Islamabad, says the remote region is a particularly difficult place to launch a rescue mission, but improving weather conditions are expected to help the operation.
Maj Gen Abbas said the avalanche that hit the military camp had been "very massive" and it could take several days to complete the rescue operation, which was unprecedented in scale for such a location. 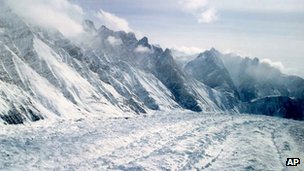 The Siachen glacier is in a remote mountain area claimed by both Pakistan and India
He said there had been no communication with any of the missing soldiers.
"It's too early to say how many survived and how many bodies have been recovered," he said.
Although the region is prone to avalanches, the general said, they tend to occur in "forward bases" at higher altitude, where only 10 or 20 troops are located.
The numbers involved in this incident were so high, he said, because avalanches were not expected in the immediate area of the camp that was struck.
An avalanche killed 24 Pakistani troops in 2010 - this is believed to be the heaviest loss of life in a previous such incident until now.
Kashmir has been partitioned between India and Pakistan since 1947.
Failure to agree on the status of the territory by diplomatic means has twice brought India and Pakistan to war.
The Siachen glacier is known as the world's highest battlefield, and soldiers have been deployed at elevations of up to 6,700m (22,000 feet).
However, more soldiers have died from the harsh weather conditions there than in combat.
at April 07, 2012

Our prayers are with the families of the 130 soldiers... but do we need this or can we afford the loss of lives, be it, Indian or the Pakistani soldiers and the Billions it cost us since 1984 ?