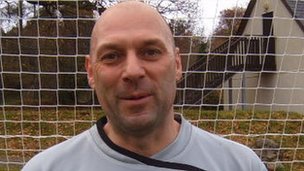 A 47-year-old footballer has died after collapsing with a suspected cardiac arrest during a cup final game.
Chris Ralph was playing for Chagford against Topsham Town in the first-half of the Devon Veterans' County Cup final at Newton Abbot on Friday night.
The father-of-four from Budleigh Salterton, Devon, collapsed after 29 minutes and died later in Torbay Hospital. The game was abandoned.
The club said he was a "fine player, a loyal clubman and great family man".
'Very sad'
Club Secretary John Pearce said: "The club is stunned by this event but our thoughts must be with Chris's family at this time of great sorrow."
South Devon Football League secretary Anthony Roach said: "Chris played in the league for many years and was very well known in local football circles.
"All our thoughts are with his family and friends at this very sad time."
The league has asked clubs to hold a minute's silence in memory of Mr Ralph next weekend.
It follows the collapse of 23-year-old Bolton Wanderers player Fabrice Muamba whose life was saved after he suffered a cardiac arrest during a game against Tottenham Hotspur in the FA Cup in March
at April 01, 2012