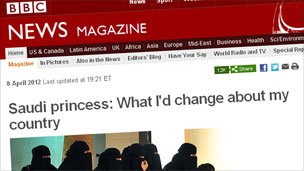 Last week, Princess Basma bint Saud bin Abdulaziz set out five ways she thought Saudi Arabia could change for the better.
She focused on the constitution, divorce laws, education system, social services and the custom of women having a chaperone.
There was a huge response from readers to the princess's article. Many cheered her on, but some opposed her ideas. Here are some emails from those who disagree with her.

Basma has raised a few good points which need attention by the local authorities, namely, the constitution and divorce laws.

What the princess asked for:

However, some of her remarks are incendiary to the masses living here.
For example, the masses of people love the Prophet Muhammad and take his words and deeds seriously. For us, Islam is a way of life, a way prescribed to us by the divine which is better than all human systems. For somebody to mock the words of the Prophet as "wasting time on learning quotations" is obnoxious.
I agree that there should be educational reforms to keep at par with the world; however, that should not be at the expense of watering down our own values and beliefs. We will not allow that to happen. Islam believes in separation of responsibilities of men and women and that ensures a healthy society. When this institution is broken, we see broken families, incoherent societies, old age homes etc as evident in many countries.
With regards to a woman travelling with a chaperone, it is a universal law applicable even today. It is for her safety and protection.
One piece of advice for Basma. Please read and analyse the divine texts without any preconceived biases to be able to come to a right conclusion. You are trying to superimpose Western secular liberalism on Islam and trying to push that as a system here which, in my opinion, is unreasonable.
Hassan Mahfooz, Jeddah

I live in Saudi Arabia, and Princess Basma's comments are not totally accurate to the realities of the country. Women frequently do move around without male chaperones, to go shopping or to travel to and from work or school. Whether or not they are allowed to is largely irrelevant, because they do it and nobody stops them. The second point is that, yes, they cannot drive, but the overwhelming majority of Saudi families have a driver to whom they pay a pittance. Even if women could drive by law, they mostly wouldn't. The real social injustice in Saudi is the disgustingly low wages paid to family drivers who are on call 24/7 and are treated like slaves by their employers.
Paul, Riyadh

The princess's comments give a somewhat blurred picture of the current situation in Saudi Arabia. I am an expatriate living in this country since my childhood days. What I am seeing now is a totally different scenario, in terms of women's education and rights. Saudi women today are enjoying and practising their (allowable) freedom ever more than before. They are getting a good education, starting to work and are constantly developing. I agree with the princess on the issue of women driving; Saudi society is just not prepared for that ethically and traditionally.
Vasic Soton, expat living in Jeddah


Don't take religion out of education

Yes, the educational systems will benefit from a revision and development plan, but I strongly disagree with the limitation of the religious courses. Islam in its golden times was never against creativity or tolerance, and the examples on that are many. Decreasing the amount of religious content in the curriculum is not the way to improve the quality of the educational system product, but infusing more sciences and applying new models of education is.
Saudi Arabia spends somewhere between one-quarter and one-third of its budget every year for the last seven years on education and training, giving scholarships to thousands of students every year to study abroad. The latest statistics indicate that there are more than 130,000 Saudi students abroad, studying languages, doing undergrad or graduate degrees, with around 17,000 in the UK. Chances in these programmes are given to both men and women.
Yes, of course, the picture is not always pretty and rosy, but I think that there is a lot of progress there that deserves looking at. I come from a relatively conservative family but that didn't stop any of my sisters or female cousins (and they are many) from getting their higher education completed, and working in different institutions and being independent caring mothers and loving spouses.
For a country that was torn apart by tribal conflicts and harsh living conditions less than 90 years ago, only those who have witnessed the dramatic change can give a good perspective.
Abdossalam Madkahli, from Riyadh, studying at Oxford, UK
at April 18, 2012