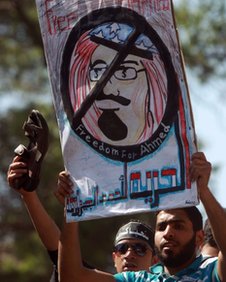 Saudi Arabia has shut its embassy and consulates in Egypt following protests over an Egyptian lawyer who has been detained in Saudi Arabia.
The Saudi ambassador to Egypt had also been recalled, the Saudi state news agency said.
Egyptian protesters have demanded the release of human rights lawyer Ahmed al-Gizawi.
He was detained earlier this month on arrival in Saudi Arabia and accused of insulting King Abdullah.
Egyptian activists say the lawyer was held after lodging a complaint against Saudi Arabia for its treatment of Egyptians in its prisons.
His family say he had gone to perform a minor pilgrimage - a detail which has angered many Egyptians who feel resentment at the kingdom's treatment of Egyptians.
But Saudi authorities say Mr al-Gizawi was found by airport officials to be carrying drugs - allegedly more than 20,000 anti-anxiety pills - in his luggage.
They say they doubt Mr al-Gizawi was on a pilgrimage, as he was not wearing white pilgrims' clothes.
at April 28, 2012