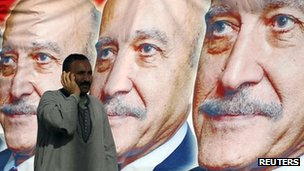 Egypt's former intelligence chief, Omar Suleiman, has strongly criticised the Muslim Brotherhood and insisted he would restore stability as president.
In an interview published in Egyptian newspapers, Gen Suleiman suggested the Islamist group had lost popularity as it sought to monopolise power.
If elected, he promised not to "reinvent" the regime of Hosni Mubarak.
However, the Muslim Brotherhood's candidate said Egyptians would return to the streets if Gen Suleiman won.
"We strongly reject the attempt to reproduce the former regime represented in the person of Major General Omar Suleiman," Khairat al-Shater, who was imprisoned during Mr Mubarak's rule, told reporters.
"This is an insult to the Egyptian revolution and reflects a lack awareness of the nature of change that has happened in the Egyptian people."
'Death threats'
Gen Suleiman served as the head of Egypt's General Intelligence Department for 18 years, a position that gave him a central role in a regime that was accused of corruption and human rights abuses.
He became the country's first vice-president in 30 years on 29 January 2011, four days after the popular uprising against Mr Mubarak began.

Two weeks later, it was Gen Suleiman who appeared on state television to announce the long-time president had stepped down.
But in the interview published by the newspaper al-Akhbar, the 75-year-old sought to distance himself from the old regime.
"The clock cannot be turned back and the revolution laid down a new reality that cannot be ignored," he said. "And no-one, no matter who he is, will be able to reinvent a regime that fell, folded and was rejected and revolted against."
Gen Suleiman said he had objected to many of Mr Mubarak's policies, laws and "what transpired" in the widely-criticised 2010 parliamentary elections.
"Those who think that my candidacy for president means reinventing the former regime must realise that being the head of the General Intelligence Department or vice-president for a few days does not mean that I was part of an institution against which people revolted," he added.
"I am counting on the little people, on the young and on intellectuals. I am counting on those who want security and stability, who want to be able to earn a living in dignity and freedom."
He also said the Muslim Brotherhood had "lost a lot of its popularity".
"There has been a change on the Egyptian street. The practises of the Brotherhood and their monopolistic ways and unacceptable pronouncements have contributed to the change in public opinion."
He claimed to have received death threats from "elements" of the Muslim Brotherhood and other Islamist groups since Friday, and said they were "deluding themselves" if they thought he would abandon his candidacy.
The BBC's Yolande Knell in Cairo says there are many other candidates standing in this election, including the former Arab League Secretary General, Amr Moussa, and the Salafist, Hazem Abu Ismail.
But for now, the political debate in Egypt has polarised along familiar lines, our correspondent adds.
at April 09, 2012