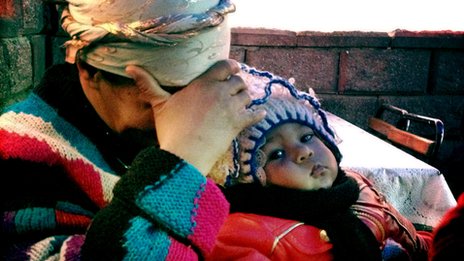 The BBC has been told by doctors that Uzbekistan is running a secret programme to sterilise women - and has talked to women sterilised without their knowledge or consent.
Adolat has striking looks, a quiet voice and a secret that she finds deeply shameful.
She knows what happened is not her fault, but she cannot help feeling guilty about it.
Adolat comes from Uzbekistan, where life centres around children and a big family is the definition of personal success. Adolat thinks of herself as a failure.
"What am I after what happened to me?" she says as her hand strokes her daughter's hair - the girl whose birth changed Adolat's life.
"I always dreamed of having four - two daughters and two sons - but after my second daughter I couldn't get pregnant," she says.

End Quote Uzbek gynaecologist
She went to see a doctor and found out that she had been sterilised after giving birth to her daughter by Caesarean section.
"I was shocked. I cried and asked: 'But why? How could they do this?' The doctor said, 'That's the law in Uzbekistan.'"
Sterilisation is not, officially, the law in Uzbekistan.
But evidence gathered by the BBC suggests that the Uzbek authorities have run a programme over the last two years to sterilise women across the country, often without their knowledge.
Foreign journalists are not welcome in Uzbekistan, and in late February of this year the authorities deported me from the country. I met Adolat and many other Uzbek women in the relative safety of neighbouring Kazakhstan. I also gathered testimony by telephone and email, and in recordings brought out of the country by courier.
None of the women wanted to give their real names but they come from different parts of Uzbekistan and their stories are consistent with those of doctors and medical professionals inside the country.
"Every year we are presented with a plan. Every doctor is told how many women we are expected to give contraception to; how many women are to be sterilised," says a gynaecologist from the Uzbek capital, Tashkent.
Like all doctors I interviewed, she spoke on a condition of anonymity. Talking to a foreign journalist could result in a prison term, in a country where torture in detention is the norm.
"There is a quota. My quota is four women a month," she says.
Two other medical sources suggest that there is especially strong pressure on doctors in rural areas of Uzbekistan, where some gynaecologists are expected to sterilise up to eight women per week. 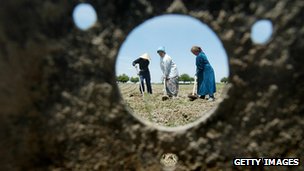 Listen to the full report on Crossing Continents on BBC Radio 4 on Thursday, 12 April at 11:00 BST and on Assignment on the BBC World Service

"Once or twice a month, sometimes more often, a nurse from the local clinic comes to my house trying to get me to the hospital to have the operation," says a mother of three in the Jizzakh region of Uzbekistan.
"Now it's free, but later you will have to pay for it, so do it now," the nurse tells the mother.
Another mother says she experienced months of mysterious pain and heavy bleeding following the birth of her son. Then she had an ultrasound check and discovered that her uterus had been removed.
"They just said to me, 'What do you need more children for? You already have two,'" she says.
The BBC gathered similar testimony from the Ferghana Valley, the Bukhara region and two villages near the capital Tashkent.
According to a source at the Ministry of Health, the sterilisation programme is intended to control Uzbekistan's growing population, which is officially held to be about 28m people. Some demographers are sceptical, however, pointing to the large numbers of people who have emigrated since the last census in 1989, when the population stood at around 20m.

On paper, sterilisations should be voluntary, but women don't really get a choice”

End Quote Uzbek doctor
"We are talking about tens of thousands of women being sterilised throughout the country," says Sukhrob Ismailov, who runs the Expert Working Group, one of very few non-governmental organisations operating in Uzbekistan.
In 2010, the Expert Working Group conducted a seven-month-long survey of medical professionals, and gathered evidence of some 80,000 sterilisations over the period, but there is no way of verifying the number and some of the procedures were carried out with the patient's consent.
The first cases of forced sterilisation were reported in 2005, by Gulbakhor Turaeva - a pathologist working in the city of Andijan who noticed that uteruses of young, healthy women were being brought to a mortuary where she worked.
After gathering evidence of 200 forced sterilisations, by tracing women from whom the uteruses were removed, she went public with her findings and asked her bosses for an explanation. Instead they sacked her.
In 2007 Turaeva went to jail, accused of smuggling opposition literature into the country. Like many others, she refused to be interviewed for this report because of fears for her and her children's safety. 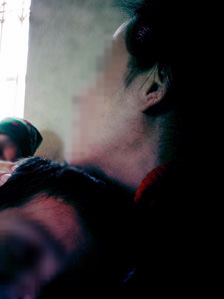 The women who were interviewed did not want to be identified
In 2007, the United Nations Committee Against Torture also reported forcible sterilisations and hysterectomies in Uzbekistan, and the number of cases of forced sterilisation appeared to fall.
But according to medical sources, in 2009 and 2010 the Uzbek government issued directives ordering clinics to be equipped to perform voluntary surgical contraception. In 2009, doctors from the capital were also despatched to rural areas to increase the availability of sterilisation services.
There is evidence that the number of sterilisations then began to rise again.
"On paper, sterilisations should be voluntary, but women don't really get a choice," says a senior doctor from a provincial hospital, who wished to remain unnamed.
"It's very easy to manipulate a woman, especially if she is poor. You can say that her health will suffer if she has more children. You can tell her that sterilisation is best for her. Or you can just do the operation."
Several doctors I spoke to say that in the last two years there has been a dramatic increase in Caesarean sections, which provide surgeons with an easy opportunity to sterilise the mother. These doctors dispute official statements that only 6.8% of women give birth through C-sections.
"Rules on Caesareans used to be very strict, but now I believe 80% of women give birth through C-sections. This makes it very easy to perform a sterilisation and tie the fallopian tubes," says a chief surgeon at a hospital near the capital, Tashkent.

Several doctors and medical professionals said forced sterilisation is not only a means of population control but also a bizarre short-cut to lowering maternal and infant mortality rates.
"It's a simple formula - less women give birth, less of them die," said one surgeon.
The result is that his helps the country to improve its ranking in international league tables for maternal and infant mortality.
"Uzbekistan seems to be obsessed with numbers and international rankings," says Steve Swerdlow, Central Asia director at Human Rights Watch.
"I think it's typical of dictatorships that need to construct a narrative built on something other than the truth."
Swerdlow believes foreign governments could do more. Until recently Uzbek President Islam Karimov was a pariah in the West, but in recent years both the US and the EU have lifted sanctions, including a US ban on arms sales.
This is apparently related to America's worsening relationship with Pakistan and Nato's increased use of routes through Central Asia, including Uzbekistan, to get supplies and troops in and out of Afghanistan. 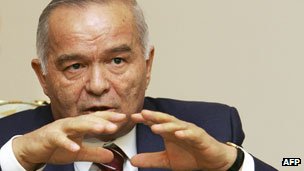 A number of Western dignitaries have visited Uzbekistan in recent months, but few have made any public comment on the country's human rights record.
"Karimov has managed to get to the point in his relationship with the West when there are no consequences for his actions and human rights abuses," says Swerdlow.
"There is a deafening silence when it comes to human rights. Reports of forced sterilisation add urgency to breaking this silence."
In a written reply to the BBC's request for comment, the Uzbek government said the allegations of a forced sterilisation programme were slanderous and bore no relation to reality.
The government also said that surgical contraception was not widespread and was carried out only on a voluntary basis, after consultation with a specialist and with the written consent of both parents.
The Uzbek government stressed that Uzbekistan's record in protecting mothers and babies is excellent and could be considered a model for countries around the world.
However, Nigora is among many for whom forced sterilisation is a reality. She had an emergency C-section. A day later she was told she had been sterilised. On the same day, her newborn died.
Nigora is 24 and will never have children.
at April 12, 2012