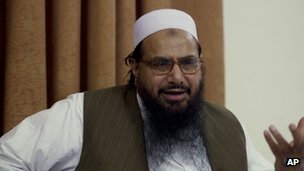 The founder of Pakistan-based militant group Lashkar-e-Taiba (LeT) has described a $10m (£6.2m) bounty on his head - announced by the US on Tuesday - as "ridiculous and misguided".
Speaking at a press conference in Islamabad, Hafiz Saeed said that he was neither a fugitive from American law nor a saboteur hiding in the mountains.
Mr Saeed travels widely in Pakistan from his base in the city of Lahore.
He now heads the Jamaat-ud-Dawa (JuD) group, widely seen as a LeT front.
LeT is blamed for the 2008 Mumbai attacks in India. The three-day rampage by 10 gunmen in November 2008 left 165 people dead. Nine of the attackers were also killed.
Local media on Wednesday quoted Pakistan interior ministry sources as saying that the government cannot proceed against Mr Saeed without "hard and undeniable evidence that can withstand judicial scrutiny".
He has consistently denied any suggestion that either he or JuD - which he says is a charity - played any role in militant violence.
Pakistan arrested LeT's senior leaders after the Mumbai attacks. But most of them, including Mr Saeed, were later freed on appeal.
"I am here, I am visible," Mr Saeed said, suggesting he should be entitled to the reward money because his whereabouts were not a mystery.
"I will be in Lahore tomorrow. America can contact me whenever it wants to."
The BBC's M Ilyas Khan in Islamabad - who attended the news conference given by Mr Saeed on Wednesday - says that he has been at the centre of an alliance of religious forces in Pakistan that is presently campaigning for an end to all ties between his home country and India and the US.
Our correspondent says that the American decision to place a bounty on Mr Saeed has come at a time when its talks with the Afghan Taliban have faltered.
'Regrettable'
In an earlier interview with the Associated Press news agency, Mr Saeed said that the US only announced the reward because of his demonstrations against reopening supply lines through Pakistan to Nato troops in Afghanistan. 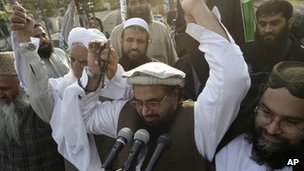 The US says that Mr Saeed continues to spread ideology advocating terrorism
The supply routes were closed down in November when 24 Pakistani soldiers on the border with Afghanistan were accidentally killed in a US air strike.
"We are organising massive public meetings to inform the nation about all the threats which Pakistan will face after the restoration of the supplies," he told AP in a mosque in Islamabad on Tuesday.
"With the grace of God, we are doing our work in Pakistan openly. It is regrettable that America has no information about me. Such rewards are usually for those who live in caves and mountains."
The US has designated both LeT and JuD as foreign terrorist organisations. Intelligence officials say LeT has extended its focus beyond India in recent years - plotting attacks in Europe and Australia.
Some US officials are also reported to be concerned that Pakistan may be dragging its feet over reopening the supply routes.
Correspondents say that the US bounty offer represents a change in American thinking - previously it was thought that pursuing the JuD leadership would cause too much friction with the Pakistani government.
The US state department says that Mr Saeed continues "to spread ideology advocating terrorism, as well as virulent rhetoric condemning the United States, India, Israel and other perceived enemies".
The sole surviving Mumbai gunman, Pakistani national Mohammad Ajmal Amir Qasab, was captured and sentenced to death by a court in India. His appeal is pending.
India has welcomed the bounty offer, saying it sent a strong signal to LeT members that "the international community remains united in combating terrorism" and bringing to justice those behind the Mumbai attacks.
at April 04, 2012