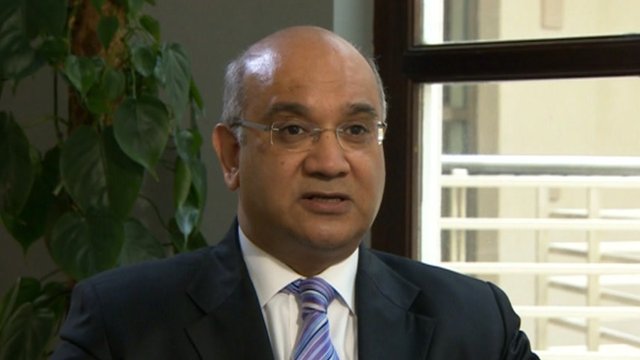 Cannot play media. You do not have the correct version of the flash player. Download the correct version
Advertisement
Committee chair Keith Vaz says the UKBA is "not fit for purpose" and "has to do much better"
Continue reading the main story

The UK Border Agency is still failing in its "basic functions" in spite of efforts to overhaul it, MPs have said.
The home affairs committee said UKBA had provided "inconsistent" information about immigration and asylum cases dating back to 2006 and this backlog would take four more years to clear.
It also said it was "deeply concerned" about the number of foreign prisoners living in the UK awaiting deportation.
Immigration minister Damian Green said "past mistakes" were being dealt with.
The UK Border Agency - responsible for securing the UK border at air, rail and sea ports and migration controls - was set up in 2008, two years after then Labour Home Secretary John Reid said the Home Office's immigration directorate was "not fit for purpose".
His predecessor, Charles Clarke, was sacked after it emerged 1,013 foreign nationals had been released from prison, without being considered for deportation.

Danny Shaw Home affairs correspondent, BBC News
How much worse can it get for the beleaguered UK Border Agency?
After the row about the unauthorised relaxation of border checks, this report tears into virtually every aspect of the Agency's work.
Above all, there's a sense of confusion among senior officials - confusion over figures on the asylum backlog; confusion over why there aren't more deportations of foreign prisoners; confusion as to whether the so-called "Lille loophole" really is a loophole.
On the face of it not much appears to have changed since 2006 when the organisation, then known as the Immigration and Nationality Directorate, was branded "not fit for purpose" by the then Home Secretary, John Reid.
Yes, the asylum system is better managed now, yes there's more focus on removing foreign criminals and yes the Agency is undergoing a management shake-up at a time of budget cuts.
But the results just aren't there yet.

But the committee's report said, six years on, only 397 of them had been removed or deported - 57 have not been located at all.
The organisation is now being split in two in the wake of a row last year over revelations that hundreds of thousands of people were let into the country without complete checks.
The UK Border Force, the section of the agency that manages entry to the UK, is to become a separate law-enforcement body reporting directly to the Home Office while the UKBA will be solely responsible for immigration policy work.
In its latest report on the workings of the UKBA between August and November 2011, the cross-party committee suggested the agency was also still not getting a grip on the backlog of approximately 450,000 asylum and immigration cases which emerged in 2006.
Last year UKBA officials said of about 365,000 cases where the individuals could be traced, 18,000 remained unresolved.
But the committee said new evidence it had seen suggested the UKBA was dealing with 1,500 more "live cases" than previously indicated. It called on the agency to "clean up and clarify" the figures.
"The agency must rid itself of its bunker mentality and focus on ensuring that Parliament and the public understands its work," the MPs said.
"Confusion over figures only risks suspicion that the agency is attempting to mislead Parliament and the public over its performance and effectiveness."
Reputation 'tarnished'
There are currently 119,000 asylum and migration cases where individuals cannot be located. MPs said, at the current rate of progress, this would take four years to clear.
The committee said it was also taking too long to consider whether foreign criminals could be deported at the end of their prison sentences.
It welcomed the fact that fewer prisoners were being released without being referred for possible deportation, but said there were 3,940 former foreign inmates living in the community - 2,670 of whom were still awaiting deportation after two years.

End Quote Damian Green Immigration Minister
Rob Whiteman, head of the UKBA, told the committee that the main problems were that some prisoners gave a false identify, so it was difficult to work out where they came from, while others did not have the travel documents needed to be readmitted to their country.
The committee's chairman Keith Vaz said more needed to be done to tackle those obstacles: "The reputation of the Home Office and, by extension, the UK government is being tarnished by the inability of the UK Border Agency to fulfil its basic functions."
Iris scanners
He said UKBA "appears unable to focus on its key task of tracking and removing illegal immigrants, overstayers or bogus students" and, having spent £9.1m on iris scanners at airports, had now decided to remove them.
"That £9.1m could have been spent on having immigration officers and case workers that would have cleared the backlog that this committee has been talking about for the last five years.
"If you look at the E-borders programme which is supposed to track every single person in and out of this country, this has still not been completed and, in our view, even with the millions of taxpayers money spent on IT, we will still not be in a position, at the time of the Olympics, for everyone to be checked in and checked out. That is not acceptable."
Immigration Minister Mr Green told BBC Radio 4's Today programme the UKBA had improved from a state of "complete chaos" when the government took office two years ago and some areas were improving faster than others.
"The asylum service is immeasurably much better than it was three or four years ago," he said - with more than 60% of asylum applicants now getting an answer within 30 days, rather than waiting "many years".
"We start deportation action on foreign national prisoners now 18 months before the end of their sentence. As a result of that, last year we removed over 4,500 foreign criminals, and 45% of those were by the end of their sentence."
Mr Green said the government had to "clear up the mistakes of the past" in dealing with foreign criminals and ensure they were not repeated.
He said the system was still not "perfect" but more would be done to tackle delays to deportation in the coming months, by changing immigration laws to cut "abuse of the Human Rights Act".
at April 11, 2012