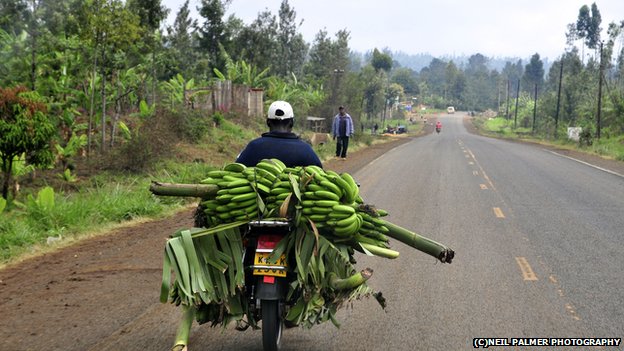 Climate change could lead to bananas becoming a critical food source for millions of people, a new report says.
Researchers from the CGIAR agricultural partnership say the fruit might replace potatoes in some developing countries.
Cassava and the little known cowpea plant could play increasingly important roles in agriculture as temperatures rise.
People will have to adapt to new and varied menus as traditional crops struggle say the authors.
Continue reading the main story

When the farmers see the problems they are having with production, they really are willing to shift”

Bruce CampbellCCAFS
Responding to a request from the United Nations' committee on world food security, a group of experts in the field looked at the projected effects of climate change on 22 of the world's most important agricultural commodities.
Blooming bananas
They predict that the world's three biggest crops in terms of calories provided - maize, rice and wheat - will decrease in many developing countries.
They suggest that the potato, which grows best in cooler climates, could also suffer as temperatures increase and weather becomes more volatile.
The authors argue that these changes "could provide an opening for cultivating certain varieties of bananas" at higher altitudes, even in those places that currently grow potatoes.
Dr Philip Thornton is one of those behind the report. He told BBC News that while bananas also have limiting factors, they may be a good substitute for potatoes in certain locations
"It's not necessarily a silver bullet but there may be places where as temperatures increase, bananas might be one option that small holders could start to look at." 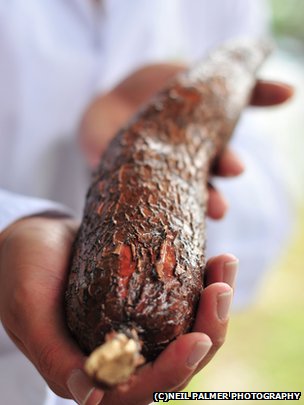 Cassava could help meet food needs in South Asia
The report describes wheat as the world's most important plant derived protein and calories source.
But according to this research, wheat will face a difficult future in the developing world where higher prices for cotton, maize and soybeans have pushed wheat to marginal land, making it more vulnerable to stresses induced by climate change.
One substitute, especially in South Asia, could be cassava which can tolerate a range of climate stresses.
But how easy will it be to get people to adjust to new crops and new diets?
Bruce Campbell is program director of the climate change, agriculture and food security research group (CCAFS) which co-ordinates work among leading institutions around the world. He told BBC News that the types of changes that will happen in the future have already happened in the past.
"Two decades ago there was almost no rice consumption in certain areas of Africa, now there is. People have changed because of the pricing, it's easier to get, it's easier to cook. I think those sort of shifts do occur and I think they will in future."
Protein under pressure
One of the big concerns among researchers is how to tackle the need for protein in the diet. Soybeans are one of the most common sources but are very susceptible to temperature changes.
The scientists say that the cowpea, which is known in sub-Saharan Africa as the "poor man's meat" is drought tolerant and prefers warmer weather and could be a reasonable alternative to soya. The vines of the cowpea can also be used as a feed for livestock.
In some countries, including Nigeria and Niger, farmers have already moved away from cotton production to growing cowpeas.
There are also likely to be developments animal protein sources says the report including a shift from to smaller livestock.
This is an example of something that's happening already," says Bruce Campbell. "There's been quite a shift from cattle keeping to goat keeping in southern Africa in face of droughts - when the farmers see the problems they are having with production, they really are willing to shift.
"Change is really possible. It's not just a crazy notion."
at October 31, 2012