The cold call victim who fought back 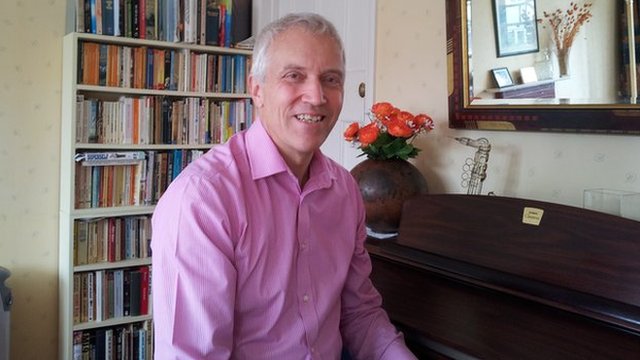 Complaints about unsolicited calls and texts from sales and marketing companies have reached an all-time high.
But now one man has successfully claimed back the cost of his time from a firm which called him when he had specifically asked them not to.
Richard Herman from Middlesex felt like he was being hounded by calls and texts from companies telling him they could help him claim compensation after an accident or claim back money spent on mis-sold payment protection insurance, or PPI as it's known.
He hasn't had an accident; he's never taken out PPI.
And he's registered with the Telephone Preference Service (TPS), which should stop unwanted sales calls.
So he decided to take action.
Time and electricity
When he took a call from an overseas call centre inviting him to make a PPI claim, in July, he stayed on the line. He answered their questions, until he was eventually passed through to a UK operation, called PPI Claimline, and told them he wanted to be taken off their sales lists.
Continue reading the main story

Richard HermanWon compensation from PPI firm
"I said to them, you need to stop calling me and, I said, if you keep calling me, I'll charge you £10 a minute for my time to be talking to you," Mr Herman said.
"I presumed that would be the end of it, but to my astonishment they called me again."
During the second call - which had come only two days later - it took Mr Herman 19.5 minutes to get put through to the UK operation, to confirm that it was the same company as before, and to explain that he was now charging for his time.
So when he got off the phone, he sent an invoice for £195 to PPI Claimline
At first, he got no response. So Mr Herman sent the invoice again, this time by recorded delivery. PPI Claimline then wrote to him.
It said it itself did not cold call, but it purchased introductions from other marketing companies including AAC, a UK company based in Bishop's Stortford, Hertfordshire, which uses the overseas call centre that had first called Mr Herman and passed him on to PPI Claimline.
The company said there was no record of Mr Herman's number in its database or that of any of its partner companies.
But Mr Herman had recorded the phone calls. So, stepping up his consumer assertiveness another gear, he filed a case in the small claims court.
And that seemed to do the trick. The case was settled before it went to court.
AAC, the company which had called Richard on behalf of PPI Claimline, paid him £195 for his time and electricity, as well as his £25 court costs.
Breaking the law
It's been a cathartic experience for Mr Herman:
"It cheered me up to think that actually instead of being the victim of these calls I can actually defend myself against them to put the boot onto the other foot."
Both PPI Claimline and AAC declined to be interviewed by the BBC. But they issued statements, saying they are sorry that Mr Herman was called after he had asked for the calls to stop.
They say they only contact people who have opted in to receiving marketing calls, and they say Mr Herman has done so via a website he visited, where you tick or untick a box to agree to be contacted by other companies. Mr Herman says he hasn't.
But even if he had, AAC is still breaking the law in this case, according to John Mitchison from the Telephone Preference Service.
Continue reading the main story

It's really good to see the public joining in the fightback”

Simon EntwhistleInformation Commissioner's Office director of operations
"If Mr Herman had given specific consent for a named company to contact him, then that would have overridden TPS, but it would have to have been as blatant as that.
"General third party opt-in does not override TPS.
"The company should have been screening against TPS. It's a legal requirement to do that."
'Frustrating'
If you are registered with the TPS, and receive a cold call, you can complain to the TPS who will do a first round of investigations and pass the company's details on to the Information Commissioner's Office (ICO).
But the ICO has not been doing enough to stop rogue companies, according to Mr Mitchison:
"They haven't made any serious enforcement action for quite some time. At the beginning of this year, the ICO were given increased powers.
"They can now enforce a civil monetary penalty of £500,000, but they haven't done anything in the area of the TPS as yet.
"It's very frustrating. We obviously receive a huge number of complaints each month and we receive telephone calls from people that are being deluged by this type of call - particularly in the area of PPI and accident claims."
Ofcom figures show that complaints about cold calls trebled in the first half of this year, with nearly 10,000 complaints lodged in July alone.
'Wry smile'
But the ICO is taking the problem of nuisance calls seriously, according to its director of operations, Simon Entwhistle.
"In the past five or six years, we've taken action against 19 different companies for making calls that breach the electronic communications regulations," he said.
"The power to fine has only been in force for the last year. We have issued our first notice of intent to fine someone and the fines are totalling over £250,000.
"That's actually for people who've been sending spam texts, but these people don't just send one medium…they send several different mediums."
And what does he think of Mr Herman's success in taking matters into his own hands?
"It raised a wry smile. I think the people that make these calls are a nuisance and it's really good to see the public joining in the fight back against them."
And other sales companies would probably do well to take Mr Herman's details off their databases, because he's ready for their call:
"I continue to receive further telemarketing calls, albeit from other companies. And I say to them every time now, that I will charge them £10 a minute if they call again.
"I would like to think that it will help other people because every friend and family member I speak to all feels very under the cosh of these telemarketing companies."
AAC of Bishop's Stortford is not connected to AAC Direct of Cardiff.
at October 27, 2012