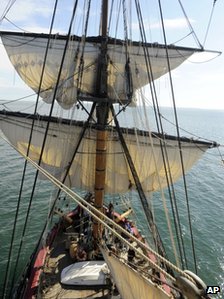 HMS Bounty has featured in the films Treasure Island, Mutiny on the Bounty and Pirates of the Caribbean
The US coastguard has rescued 14 of at least 16 people forced to abandon HMS Bounty off the coast of North Carolina amid Hurricane Sandy.
The captain gave the order for the crew to enter the lifeboats at 04:30 local time (08:30 GMT).
The US coastguard said it was still seeking two more crew members.
HMS Bounty is a replica of the original Bounty, famous for its ill-fated trip to Tahiti and the West Indies in 1789, and has appeared in several films.
It was initially reported that 17 people were on board, but the coastguard later said that 16 were in life rafts, awaiting rescue.
Tracie Simonin, director of the HMS Bounty Organisation, said that the ship began to experience difficulties at about 19:30 on Sunday when it lost power and was unable to continue "de-watering".
"At that time we contacted the US coastguard for assistance," she said.
"A C-130 plane was sent to their position, which was 90 miles south-east of Cape Hatteras, and then... this morning the captain ordered all hands to abandon ship."
Canadian broadcaster CBC has reported that the ship sank several hours after the evacuation, but Ms Simonin told the BBC that she had not been told this by the coastguard.
"The last we heard the ship was still upright," she said.
HMS Bounty has featured in a number of Hollywood films since it was launched in 1960, including Mutiny on the Bounty in 1962 and Pirates of the Caribbean.
at October 29, 2012