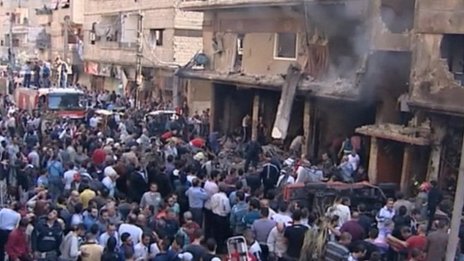 At least 10 people have been killed in a car bombing in the Syrian capital Damascus, state media report, on the fourth day of a supposed ceasefire.
State TV said women and children were among the victims of the attack in the south-eastern area of Jaramana.
Earlier, activists said government jets had bombed the city's Harasta district.
UN envoy Lakhdar Brahimi, who brokered the truce over the Islamic holiday of Eid al-Adha, said he regretted that both sides were not complying with it.
"The situation is bad and getting worse," he told reporters in Moscow after talks with Russian Foreign Minister Sergei Lavrov.
Continue reading the main story

Lakhdar BrahimiUN envoy to Syria
But Mr Brahimi nevertheless insisted that he would not be discouraged by the apparent failure of his initiative, which he had hoped would allow a political process to develop and lead to a permanent end to hostilities.
"It will not discourage us because Syria is very important and the people of Syria deserve our support and interest," he added. "We think this civil war must end... and the new Syria has to be built by all its sons."
Mr Lavrov said that the opposition's allies in the West and in the Middle East should realise that without dialogue with the Syrian government no solution would be found.
At least 110 people - including 39 civilians, 34 rebel fighters and 35 security forces personnel - were killed on Sunday, according to Syrian Observatory for Human Rights (SOHR), a UK-based activist group.
Cross-border shelling
The BBC's Jim Muir in Beirut says there has been no real pause in hostilities in Syria since the four-day ceasefire supposedly came into force on Friday morning. More than 420 people are said to have died.
On Monday morning, videos were posted online by activists purportedly showing government aircraft bombing Harasta, an area in the north-east of Damascus. The footage also showed people being dug out of the rubble and fleeing the area.
"The army is conducting raids on agricultural lands and orchards around the capital because the rebels are trying to regroup and to strengthen their positions there," a security official told the AFP news agency. 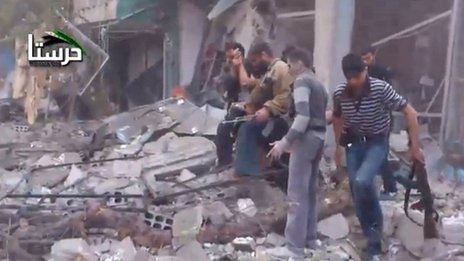 Online videos purportedly showed people being dug out of the rubble in Harasta
Residents in Damascus told Reuters that there had been heavy bombing raids in the suburbs of Qaboun, Zamalka and Irbin overnight.
There were also reportedly air raids on towns and villages across the north-western province of Idlib, where government forces and rebels have been fighting for control of the Wadi Daif military base.
The head of the Syrian Observatory for Human Rights, Rami Abdul Rahman, said the air strikes were the heaviest seen since the government started using warplanes earlier this year.
The SOHR is one of the most prominent organisations documenting and reporting incidents and casualties in the Syrian conflict. The group says its reports are impartial, though its information cannot be verified.
Later, state media said a "terrorist group" had detonated a car bomb outside a bakery in Jaramana, a predominantly Christian and Druze area of the capital.
A government official told the Associated Press that the explosion had also wounded 41 people and caused heavy damage.
The Local Co-ordination Committees (LCC), an opposition activist network, said the car bomb appeared to have targeted a police station. The area was quickly cordoned off by security forces as ambulances ferried casualties to hospital, it added.
An earlier car bomb in Damascus during the holiday period was blamed by the authorities on Islamist militants in the rebel movement, but the opposition held the government itself responsible for the attack.
In a separate development on Monday, the Turkish military fired back after a shell fired from Syria landed near the village of Besaslan in the southern province of Hatay, state media said, amid clashes between Syrian soldiers and rebels in the nearby border town of Harim.
Turkish forces have responded to every cross-border shelling since five Turks were killed on 3 October. No injuries were reported on Monday.
According to opposition and human rights activists, more than 35,000 people have been killed since protests against President Bashar al-Assad erupted in March 2011, while the UN estimates at least 20,000 have died.
at October 29, 2012