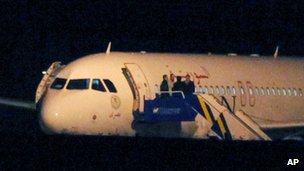 Russia says the Syria-bound plane intercepted by Turkey amid reports it was carrying cargo which could aid government war efforts was transporting a legal shipment of radar equipment.
"There were no weapons on the plane," said Foreign Minister Sergei Lavrov.
His comments followed heated exchanges between Turkey and Syria over the exact nature of the items confiscated.
Turkey's PM earlier said Russian-made defence equipment was found on board - a claim Syria dismissed as a lie.
Damascus has challenged the Turks to put the seized goods on public view.
Relations deteriorated sharply last week after the deaths of five Turkish civilians in shelling from across the border.
On Friday, Turkey reportedly scrambled fighter jets after an air attack on a Syrian frontier town by Syrian government forces.
And in Syria itself, activists said rebel fighters had seized a government air defence base near the embattled north-western city of Aleppo.
'Dual-purpose cargo'
The Syrian Air plane was intercepted by Turkish fighter jets en route from Moscow to Damascus on Wednesday, and forced to land in Ankara.
"We have no secrets," the Russian foreign minister told reporters in Moscow in the government's first official comments on the cargo aboard the Syrian Airbus 320.
"There were, of course, no weapons on the plane and could not have been any.
"This cargo is electrical technical equipment for radar stations, this is dual-purpose equipment but is not forbidden by any international conventions," Sergei Lavrov said.
His comments were the Russian government's first remarks about the nature of the cargo.
Viktor Murakhovsky, a defence expert, told the BBC Russian Service that the equipment was "definitely for anti-aircraft systems".
"These are usually magnetrons and travelling-wave tubes, which need replacing fairly frequently," he said.
Russia has remained an ally of the Syrian government, whereas Turkey has been a critic of Syrian President Assad since anti-government protests erupted there more than a year ago.
Russia also has arms contracts with the Syrian government worth billions of dollars.
at October 12, 2012