An Iranian naval task force has docked in Sudan, carrying with it a "message of peace and security to neighbouring countries", Iranian state media report.
The vessels, which include a corvette and freighter, set sail from Iran last month, the Irna news agency said.
Their arrival comes six days after explosions destroyed an arms factory in the Sudanese capital, Khartoum.
Sudan has complained to the UN that Israel bombed the factory, which is believed to have been operated by Iran.
Israel has neither confirmed nor denied responsibility for the incident.
Anti-piracy patrol
According to Iranian state media, the naval task force which docked in Sudan on Monday morning includes the Shahid Naqdi, a corvette-class vessel, and the Kharg, a supply vessel that can carry three helicopters.
Continue reading the main story

Jonathan MarcusBBC Diplomatic Correspondent
The visit by the Iranian warships to Sudan underscores the defence and security ties between the two countries.
The arms factory that was the target of the air strike is believed by analysts to be an Iranian facility manufacturing rockets and other weaponry, some of which is smuggled from Sudan, via Egypt, to Hamas fighters in the Gaza Strip.
Israel has refused to say anything about the alleged raid. But intelligence sources believe that there have been at least three Israeli air strikes over the past three years aimed at disrupting this arms smuggling network. Sudan was quick to point the finger of blame at Israel this time as well.
The Iranian navy was quoted as saying the visit was aimed at "conveying the message of peace and friendship to the neighbouring countries and ensuring security for seafaring and shipping lanes against marine terrorism and piracy".
The commanders of the Iranian flotilla were said to have met Sudanese navy commanders during the docking ceremony.
The location of the port was not given by Irna, but the semi-official Fars news agency said the task force had docked in Port Sudan.
The vessels reportedly left the southern Iranian port of Bandar Abbas for international waters in September.
Iranian vessels have been part of an international flotilla of warships patrolling the Gulf of Aden, near the entrance to the Red Sea, since 2008, when Somali pirates hijacked an Iranian-chartered cargo ship, MV Delight, off the coast of Yemen.
'Impact craters'
Iran made no connection between the task force's arrival and the explosions at the al-Yarmouk military depot and ammunition plant, which left two people dead.
However, unconfirmed reports over the weekend suggested the facility was being used by Iran's Islamic Revolution Guards Corps (IRGC) to produce weapons for the Palestinian Islamist movement, Hamas.
On Saturday, the Satellite Sentinel Project said satellite images showed six large craters, about 16m (52ft) across and "consistent with impact craters created by air-delivered munitions, centred in a location where, until recently some 40 shipping containers had been stacked".
"A 12 October image shows the storage containers stacked next to a 60m-long shed," it added. "While we cannot confirm the containers remained on the site on 24 October, analysis of the imagery is consistent with the presence of highly volatile cargo in the epicentre of the explosions." 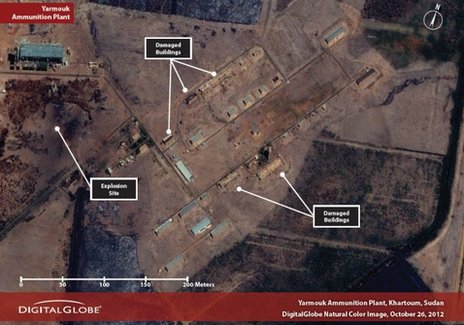 Reports suggest that shortly after midnight on Wednesday, four Israeli warplanes attacked the factory with two one-tonne bombs.
They were supported by helicopters carrying commandos to rescue any of the air crew in case they were shot down, the reports added. Another aircraft jammed Sudanese radar and air-defence systems, as well as disrupting local communications.
They reportedly took off from the Negev desert and re-fuelled in flight.
It is alleged that Israel's Mossad intelligence agency found documents relating to Iranian and Sudanese weapons manufacture on a senior Hamas official it is accused of assassinating in Dubai in 2010.
BBC Africa analyst Martin Plaut says Israel will not confirm any of the allegations officially, but it has carried out a series of raids inside Sudan down the years.
However, the Sudanese government said in May that one person had been killed after a car exploded in Port Sudan. That explosion resembled one last year which left two people dead and was blamed on an Israeli missile strike, it added.
at October 29, 2012