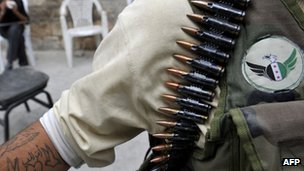 Syrian rebels have taken an air defence base from government forces near the northern city of Aleppo, activists say.
The al-Taaneh base lies east of Aleppo, where fighting between the two sides has raged for months.
In Aleppo itself, state media said soldiers destroyed 14 rebel pick-up trucks mounted with machine-guns.
Meanwhile in the row over Turkey's interception of a Syria-bound plane, Russia said the aircraft was legally carrying radar parts.
Turkey's prime minister earlier said Russian-made defence equipment had been found on board - a claim which Syria branded a lie, challenging Ankara to put the seized items on public display.
On the border tensions continued, with Turkey reportedly scrambling fighter jets after an air attack on a Syrian frontier town by government forces.
Relations deteriorated sharply last week after the deaths of five Turkish civilians in shelling from across the border.
'Rockets destroyed'
The base at Taaneh is said to be part of a large defensive network across the country.
Video posted online showed rebels inside the base, inspecting lines of large missiles, AP reported.
A spokesman for the Revolutionary Council in Aleppo, Abu Firas, told the Guardian website that soon after the rebels' operation to take the base "the regime began to shell the base with planes and destroyed most of the rockets and radars inside".
"The planes also shelled many districts inside Aleppo and the countryside," he said.
The reported taking of the air base and renewed border flare-up came a day after what the UK-based Syrian Observatory for Human Rights said was one of the most deadly days across Syria, with some 250 deaths. 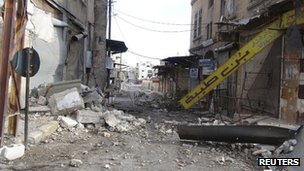 Rebel fighters are said to have the town of Maarat al-Numan, on the to Aleppo from Hama
The Syrian national news agency Sana also reported fighting across the country with dozens of "mercenary terrorists" killed, Reuters news agency reported.
Meanwhile, the UN refugee agency said on Friday it was preparing to help hundreds of thousands of Syrian refugees this winter.
According to UN figures, 340,000 Syrians have already fled to neighbouring countries - a figure that is expected to double by the end of the year.
Officials say they will make $64m (£40m) available to provide fuel, food, shelter and warm clothing for refugees, who are mostly living in camps in Turkey, Jordan and Lebanon.
They say they hope to extend help to refugees who are still in Syria as well.
at October 12, 2012