Police use Taser on blind man after stick mistaken for sword 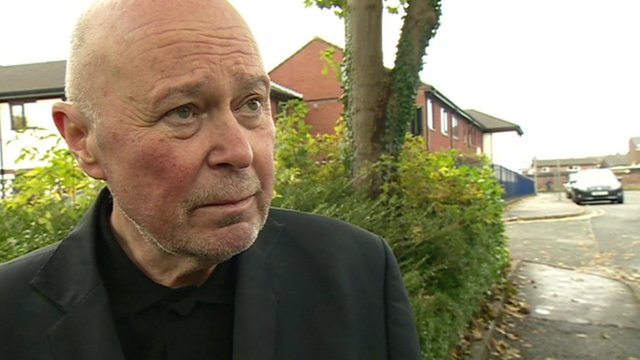 Colin Farmer said the experience had left him scared to leave the house
A police force has apologised after an officer used a Taser on a blind man whose white stick was mistaken for a sword.
Colin Farmer, 61, was stunned by police following reports of a man walking through Chorley with a samurai sword.
Ch Supt Stuart Williams, of Lancashire Police, said the force had "deep regrets" and had "clearly put this man through a traumatic experience".
Mr Farmer was taken to hospital for treatment and later discharged.
"It felt like I was grabbing an electricity pylon," he said.
Mr Farmer, who has suffered two strokes, said he thought he was being attacked by thugs.
He was walking to a pub to meet friends on Friday when the officer fired the Taser. It forced him to drop his stick and he fell to the ground, he said.
He said the experience had left him "shaking like a leaf" and scared to go outside.
The case has been referred to the Independent Police Complaints Commission.
A Lancashire Police spokesman said the incident was being investigated and the officer's Taser had been withdrawn.
'Extremely sorry'
Mr Williams said police had "received a number of reports that a man was walking through Chorley armed with a samurai sword".
Continue reading the main story

Ch Supt Stuart WilliamsLancashire Police
"A description of the offender was circulated to officers and patrols were sent to look for the man," he said.
"One of the officers who arrived in Chorley believed he had located the offender.
"Despite asking the man to stop, he failed to do so and the officer discharged his Taser."
Mr Williams said it "became apparent that this man was not the person we were looking for and officers attended to him straight away", taking him to Chorley Hospital.
He added that the force "deeply regrets what has happened".
"We have clearly put this man through a traumatic experience and we are extremely sorry for that," he said.
"We have launched an urgent investigation to understand what lessons can be learned."
A man carrying a samurai sword was later arrested on suspicion of being drunk and disorderly.

From other news sites

The BBC is not responsible for the content of external Internet sites
at October 17, 2012