Fresh clashes have broken out in the Egyptian capital Cairo in the worst violence since President Mohammed Mursi took office at the end of June.
More than 40 people were reported injured as supporters and opponents of Mr Mursi fought in Tahrir Square.
Tensions are high after Egyptian judges criticised Mr Mursi's attempt to remove the country's top prosecutor.
It follows the acquittal of 24 people accused of attacks on protesters during last year's uprising.
Witnesses said a rally critical of the president was taking place in Tahrir Square on Friday when a crowd of his supporters stormed their stage.
Fighting broke out and protesters pelted each other with stones, bottles and petrol bombs.
Doctors quoted by the state news agency Mena said some 46 people had been treated for injuries.
As darkness fell at least two buses, believed to belong to the Muslim Brotherhood which backs Mr Mursi, were seen on fire near the square. 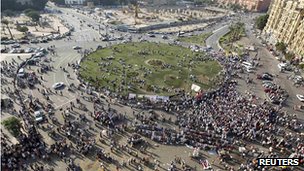 Rival groups fought each other for about five hours in Tahrir Square
An urgent screen caption on Egypt's state-run Channel 1 TV read: "Muslim Brotherhood group denounces regrettable incidents in Tahrir Square, calls on its members to withdraw from the square."
In unrest elsewhere, protesters in Egypt's northern industrial town of Mahalla stormed the headquarters of the Muslim Brotherhood and tore down pictures of President Mursi, security officials told BBC Arabic.
The BBC's Jon Leyne in Cairo says that, 100 days into his term, this is the first time President Mursi has experienced big demonstrations against him.
However, it is not clear how much it represents wider discontent with the Muslim Brotherhood and the government, he says.
Egyptians are frustrated that so far the new president appears to have done little to change the country or boost the economy, our correspondent adds.
Opponents are also angry at Egypt's proposed new constitution, which they see as too dominated by Islam.
Angry response
Earlier, a group of Egyptian judges criticised President Mursi's attempt to remove the country's top prosecutor as a "farce".
The president said he was reassigning Prosecutor-General Abdel Maguid Mahmoud - regarded as a figure from the era of ousted President Hosni Mubarak - as Vatican envoy.
Mr Mahmoud is refusing to go.
The move against Mr Mahmoud followed an angry public response to the acquittal of the 24 people who had been accused of sending men on camels and horses to break up a protest in Cairo in 2011, leaving several people dead.
Those accused included Fathi Sorour and Safwat al-Sherif, former speakers of Egypt's two houses of parliament.
Prosecutors said Mr Sherif, who was also the secretary general of Mubarak's National Democratic Party (NPD), had "contacted MPs, members of the NDP and financiers of the party, inciting them to disperse the protests in Tahrir Square by force and violence".
The case is the latest flashpoint between Mr Mursi's government and figures associated with the Mubarak era.
at October 12, 2012