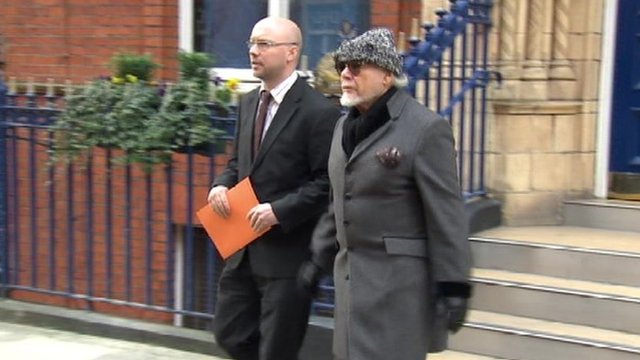 Former pop star Gary Glitter has been arrested on suspicion of sex offences by police investigating Jimmy Savile abuse claims.
He has been taken from his home into custody at a London police station.
Glitter, 68, whose real name is Paul Gadd, was jailed in Vietnam in 2006 for child sex offences.
Police are investigating allegations the late TV presenter Savile sexually abused some 300 young people over a 40-year period.
Met Police confirmed officers from Operation Yewtree had "arrested a man in his 60s in connection with the investigation".
"The man, from London, was arrested at approximately 0715 on suspicion of sexual offences. The individual falls under the strand of the investigation we have termed 'Savile and others'."
Scotland Yard has said it is following about 400 lines of inquiry as part of the operation - which is looking into claims Savile, who died last year aged 84, abused hundreds of young girls and some boys.
Police described former BBC DJ Savile as a "predatory sex offender".
Karin Ward - a former pupil at Duncroft approved school for girls in Surrey - told the BBC she had once seen singer Glitter having sex with a schoolgirl in Savile's dressing room at the BBC. Glitter has denied the allegations.
'Lessons to learn'
Glitter is the first person to be arrested in connection with the Met's Savile abuse inquiry.
The glam rock star rose to fame during the 70s, selling 18 million records by 1975.
Elsewhere the deputy leader of the Labour Party Harriet Harman has called for a judge-led inquiry into the Savile abuse claims.
She told BBC One's Andrew Marr Show: "The trouble is that there are a multiplicity of inquiries. What we need is one over-arching inquiry.
"It should be independent because there are big lessons to be learned here, not just for the BBC, although the epicentre of it was at the BBC."
Savile is also alleged to have carried out abuse at a number of institutions, such as the high security psychiatric hospital Broadmoor, Stoke Mandeville Hospital and Leeds General Infirmary.
Justice Secretary Chris Grayling told the same programme while what had happened was "horrendous" it was important not to "rush into a judge-led inquiry," arguing it would take "much longer to get to the truth".
The BBC Trust's chairman Lord Patten, writing in the Mail On Sunday,said the corporation must face up to the truth, warning it "risks squandering public trust".
Victim Ms Ward was interviewed for the BBC's Newsnight programme last November in which she made the abuse allegations, but the interview was only shown on Panorama this week as the Newsnight investigation was shelved.
Mr Patten told the paper: "Like many who work for the BBC, I feel a sense of particular remorse that abused women spoke to Newsnight, presumably at great personal pain, yet did not have their stories told as they expected."
The BBC has already announced inquiries into the Savile abuse claims. The first, led by former Sky News head Nick Pollard, is examining whether there were any failings in the BBC's management of the Newsnight investigation into Savile abuse claims.
On Monday, former Court of Appeal judge Dame Janet Smith will begin a review into the culture and practices of the corporation during Savile's time at the BBC. A further review will examine sexual harassment policies at the BBC
at October 28, 2012