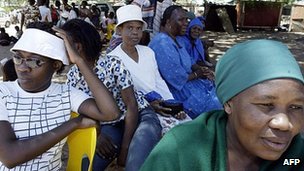 The Botswana High Court has overturned a customary law which prevented women from inheriting the family home.
The judge ruled that the law contravened the constitution, which guarantees equality for men and women.
Edith Mmusi and her sisters have fought a five-year legal battle after their nephew said he was the rightful owner of their house.
Correspondents say traditions which stop women from inheriting property exist in many African societies.
'Respect our culture'
Judge Key Dingake said that in the name of fairness and equality women should have the right to inherit property.
"It seems to me that the time has now arisen for the justices of this court to assume the role of the judicial midwife and assist in the birth of a new world struggling to be born," AFP news agency quotes him as saying.
Continue reading the main story

Priti PatelSouthern Africa Litigation Centre
The BBC's Letloghile Lucas in the capital, Gaborone, says Ms Mmusi, the only one of the sisters at the High Court in Gaborone, was very excited by the ruling.
"It's a great day for us," she said.
However, her nephew Molefi Ramantele said the court had undermined the country's culture, reports the AFP news agency.
"This is a sad day for me... People should learn to respect our culture," he said.
Our correspondent says they first contested their nephew's claim in a customary court in 2007.
They lost the case and a subsequent appeal before turning to the civil courts.
The Attorney General had reportedly agreed that the customary law was discriminatory but argued Botswana was not ready to change it.
"This is a significant step forward for women's rights not only in Botswana but in the southern Africa region, where many countries are addressing similar discriminatory laws," Priti Patel of the Southern Africa Litigation Centre (SALC) said in a statement.
According to the legal rights group, the case challenged an Ngwaketse customary law rule that allows for the youngest-born son to inherit the family home.
Ms Mmusi's parents had four daughters and a son, who before he died agreed that his older half-brother could inherit the family home in the Kanye area, about 85km (50 miles) south of Gaborone.
It is the son of the half-brother who brought the case seeking to evict the sisters living at the homestead, who are reportedly all over the age of 65.
Ms Mmusi and her sisters argued that as it was their home - and they had been contributing to its upkeep and expansion - it was theirs to inherit, the SALC said.
BBC News website readers from Africa have been sharing their thoughts on this. Here is a selection:
Simba Mhare, Harare, Zimbabwe
This happens in Zimbabwe - for many women the death of their husbands means the beginning of abject poverty.
Mabior Ayuen Dengajok, Bor, Jonglei State, South Sudan
In my tribe, the Dinka and Bor Dinka in particular, any property left by parents who die gets inherited by the older son. If the parents had no son of their own but only daughters, the sons of the daughter's uncle (their father's brother) will inherit the property. And it wouldn't matter that the daughters and their mother are alive. Women don't own properties in Dinka Bor culture.
Juliet Temba, Lusaka, Zambia
I am so happy for the women of Botswana! In Zambia, under customary law, women cannot inherit land. In our rural areas, many women leave their husband's homes and go back to their parents' land after their husbands die, regardless of whether they had children. In some parts of Zambia, there is a tradition locally known as "kupyanika" where a male relative of the deceased man (brother, uncle or nephew) marries the widow and inherits all the land, property - and the woman. Many women are forced into this so that they can stay in their homes with their children!
L Anteneh, Addis Ababa, Ethiopia
I was stunned by this news. My country, which is also in Africa, doesn't follow this type of discriminatory tradition. If the parents are dead it is the right of all the children, men or women, to inherit equally. I appreciate the sentence given by this civilised judge.
Dainty Jugheads, Kampala, Uganda
It is disheartening that in some countries, traditional customary laws are not keeping pace with changing environment and times. Countries all over the world are fighting for women's rights - to vote, to make reproductive health decision etc - and yet when it comes to property inheritance, it is sluggish. With more and more women getting formal education, they will continue to fight for for their rights. However, one question I would to pose to the male gender - why deny women property? They are your mothers, wives, sisters and daughters!
Raphael, Enugu state, Nigeria
We have the same case in Enugu High Court since 2000 waiting for the judgement between two sisters and their stepbrother who is claiming their father's property as the only son.
at October 12, 2012