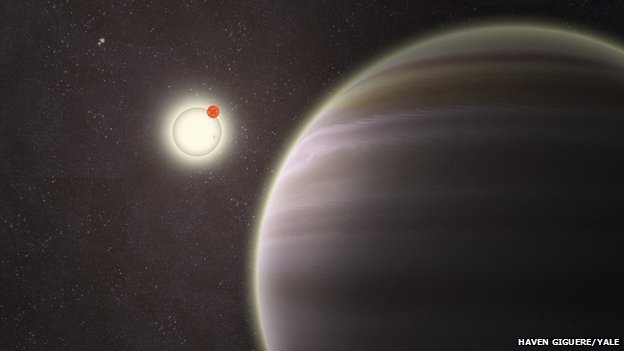 Astronomers have found a planet whose skies are illuminated by four different suns - the first known of its type.
The distant world orbits one pair of stars which have a second stellar pair revolving around them.
The discovery was made by volunteers using the Planethunters.orgwebsite along with a team from UK and US institutes; follow-up observations were made with the Keck Observatory.
A report on the Arxiv server has been submitted to the Astrophysical Journal.
Continue reading the main story

Computerised attempts to find things [in the data] missed this system entirely. That tells you there are probably more of these that are slipping through our fingers”

Dr Chris LintottOxford University
The planet, located just under 5,000 light-years away, has been named PH1 after the Planet Hunters site.
It is thought to be a "gas giant" slightly larger than Neptune - more than six times the radius of the Earth.
"You don't have to go back too far before you would have got really good odds against one of these systems existing," Dr Chris Lintott, from the University of Oxford, told BBC News.
"All four stars pulling on it creates a very complicated environment. Yet there it sits in an apparently stable orbit.
"That's really confusing, which is one of the things which makes this discovery so fun. It's absolutely not what we would have expected."
Binary stars - systems with pairs of stars - are not uncommon. But only a handful of known exoplanets (planets that circle other stars) have been found to orbit such binaries. And none of these binary systems are known to have another pair of stars circling them.
Follow-up observations were made with the Keck facility on Mauna Kea
Asked how this planet remained in a stable orbit whilst being pulled on by the gravity of four stars, Dr Lintott said: "There are six other well-established planets around double stars, and they're all pretty close to those stars.
"So I think what this is telling us is planets can form in the inner parts of protoplanetary discs (the torus of dense gas that gives rise to planetary systems).
"The planets are forming close in and are able to cling to a stable orbit there. That probably has implications for how planets form elsewhere."
Continue reading the main story 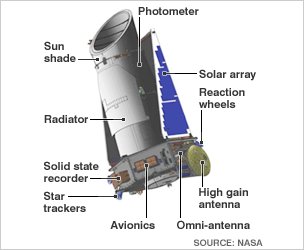 PH1 was discovered by two US volunteers using the Planethunters.org website: Kian Jek of San Francisco and Robert Gagliano from Cottonwood, Arizona.
They spotted faint dips in light caused by the planet passing in front of its parent stars. The team of professional astronomers then confirmed the discovery using the Keck telescopes on Mauna Kea, Hawaii.
Founded in 2010, Planethunters.org aims to harness human pattern recognition to identify transits in publicly available data gathered by Nasa's Kepler Space Telescope.
Kepler was launched in March 2009 to search for Earth-like planets orbiting other stars.
Visitors to the Planet Hunters website have access to randomly selected data from one of Kepler's target stars.
Volunteers are asked to draw boxes to mark the locations of visible transits - when a planet passes in front of its parent star.
Dr Lintott points out: "Computerised attempts to find things [in the data] missed this system entirely. That tells you there are probably more of these that are slipping through our fingers. We've just stuck a load of new data up on Planethunters.org to help people find the next one."
Searching for such systems, he said, was "a complicated test to hand a computer", adding: "We're using human pattern recognition, which can disentangle that reasonably well to see the important stuff."
Since December 2010, more than 170,000 members of the public have participated in the project.
Paul.Rincon-INTERNET@bbc.co.uk
at October 16, 2012