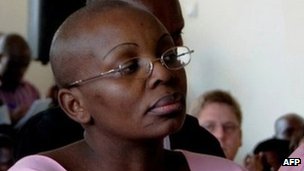 Rwandan opposition leader Victoire Ingabire has been found guilty at her treason trial and sentenced to eight years in jail.
The prosecution had requested a life sentence for the charges of threatening state security.
The court also found her guilty of "belittling" Rwanda's 1994 genocide.
Ingabire was not in court to hear the verdict as she has been boycotting the trial, saying it is politically motivated.
The Unified Democratic Forces leader was arrested in April 2010 and was barred from standing in elections later that year.
The BBC's Prudent Nsengiyumva in the capital, Kigali, says her lawyer, the deputy UDF leader and a number of her supporters were in court.
They were stunned by the verdict, expecting her to receive a life sentence, our reporter says.
She had also faced terrorism charges, but these were dropped during the two-year trial.
The UDF has 30 days to appeal against the verdict.
Ingabire, a Hutu, returned from exile in the Netherlands in January 2010 - and has been in jail since her arrest.
She has questioned why Rwanda's official memorial to the 1994 genocide does not include any Hutus.
Most of the 800,000 people killed were ethnic Tutsis but Hutu moderates were also slaughtered by the Hutu extremists.
at October 31, 2012