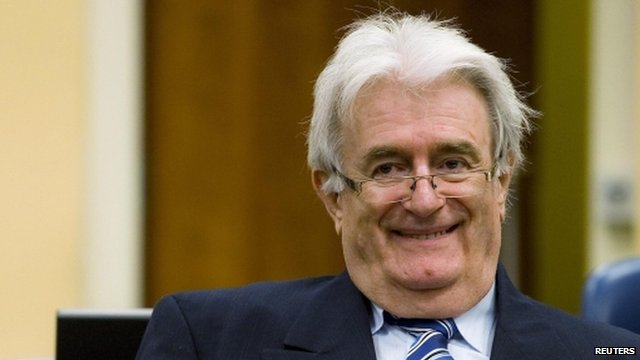 Radovan Karadzic: "I should have been rewarded for all the good things I've done"
Continue reading the main story

Former Bosnian Serb leader Radovan Karadzic has said he should be rewarded for "reducing suffering", not accused of carrying out war crimes.
Beginning his defence at his trial in The Hague, he said he was a "tolerant man" who had sought peace in Bosnia.
Mr Karadzic was arrested in Belgrade in 2008 after almost 13 years on the run.
He faces 10 charges of genocide and crimes against humanity during the war in the 1990s, including the Srebrenica massacre and the siege of Sarajevo.
More than 7,000 Bosniak (Bosnian Muslim) men and boys were killed at Srebrenica in the worst single atrocity in Europe since the end of World War II.
During the 44-month siege of Sarajevo more than 12,000 civilians died.
Mr Karadzic, 67, went on trial at the International Criminal Tribunal for the former Yugoslavia (ICTY) in October 2009.
Continue reading the main story

He appears utterly without self-doubt - as, indeed, he was two decades ago”

Allan LittleBBC News
'Truth will grow stronger'
He began his lengthy personal statement by saying he had done "everything within human power to avoid the war and to reduce the human suffering".
Speaking calmly, Mr Karadzic said he was a "mild man, a tolerant man with great capacity to understand others".
He had stopped the Bosnian Serb army many times when it had been close to victory, he said, had sought peace agreements, applied humanitarian measures and honoured international law.
He insisted that there had been no history of conflict between ethnic groups until Serbs came to feel increasingly threatened by growing power amongst Muslims in Serbia.
"Neither I, nor anyone else that I know, thought that there would be a genocide against those who were not Serbs," he said.
He criticised media coverage of the war as biased and disputed the official number of victims of the war, saying the true figure was three to four times less. More than 100,000 people were killed, according to official figures.
"As time passes this truth will be stronger and stronger, and the accusations and the propaganda, the lies and hatred, will get weaker and weaker," he said.
Market atrocities
Continue reading the main story

One of the accusations faced by the former Bosnian Serb leader is that he adopted a military strategy of using snipers and shell attacks on the civilian population of Sarajevo.
Mr Karadzic said that every shell that had fallen on Sarajevo "hurt me personally", but he complained that an attack on a street market in February 1994 had been a "shameless orchestration".
While some people had clearly been killed, the former Bosnian Serb leader said "we also saw android mannequins being thrown onto trucks, creating this show for the world".
The blast left 68 people dead and eyewitnesses described seeing people being torn apart by the explosion.
Mr Karadzic said an investigation - conducted by Col Andrey Demurenko, the Russian chief of staff of the UN peacekeeping force - into a second attack on the same market in 1995 had concluded that Serbs "would not have fired the shells in that incident".
Having called the colonel as his first witness, Mr Karadzic said the findings of his report had been "rejected as a source of information" as they went "in an unwanted direction".
Continue reading the main story 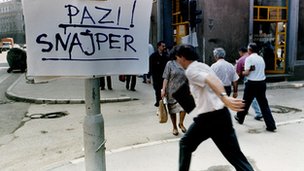 The 28 August attack left 34 people dead and many more wounded and Col Demurenko suggested that it was almost impossible that a mortar round could have been used to target a small market, particularly a market that had already been hit.
"The chance that a mortar shell would hit such a small single street... is one in a million. It's virtually impossible," Col Demurenko told the court, insisting that no such mortar fire had happened.
The two market attacks in 1994 and 1995 were among the bloodiest episodes of the Sarajevo siege. An earlier Hague war crimes trial found that the second incident was caused by a 120mm mortar.
The session was adjourned after Col Demurenko's testimony.
The BBC's Anna Holligan, at The Hague, says many survivors and relatives of the war's victims have travelled from Bosnia to see the trial of the man they hold most responsible for their suffering deliver his statement.
Each of Mr Karadzic's statements were met with cries of dismay, disgust and disbelief from the public gallery, says our correspondent.
In June, Mr Karadzic had one charge of genocide - related to the forcible expulsion of hundreds of thousands of non-Serbs from towns and villages in Bosnia - dismissed. But he failed in his attempt to have the other charges against him dropped.
Former Bosnian Serb army commander Ratko Mladic is also on trial at The Hague.