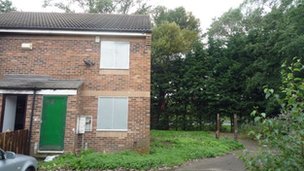 The semi-detached house will go up for auction at 18:30 GMT in Middlesbrough
Stockton could be home to Britain's cheapest house when a three-bedroom property goes under the hammer with a starting price of just £750.
The semi-detached house in the Teesside town, on Limetrees Close, Port Clarence, is up for auction later.
Similar properties have sold for more than £50,000, according to auctioneers Robinsons estate agents.
A second house on the street - which has had anti-social behaviour problems - has a £1,000 starting price.
Richard Watson, from Robinsons, said: "It is located on a decent plot but it needs a huge amount of work doing to bring it up to a decent standard.
"It has been vandalised to a very bad extent: all of the wiring has been taken out, there's no plumbing, there's no heating system, the kitchen has been removed, and the bathroom is an absolute mess."
'Really bad'
The street has suffered from anti-social behaviour and arson in the past, with Stockton North MP Alex Cunningham recently calling on residents to work with the police to bring the area back to its "former glory".
A resident, who did not want to be named, said it used to be a family area, but had become "really bad" since homes had been left empty, attracting "the wrong kind of people".
The street has more than 50 houses on it, 25% of which are currently empty, according to Stockton Council.
The resident said: "It used to be like the suburbs, it was out of the way, we even had a Neighbourhood Watch scheme.
"It all changed about six or seven years ago; the street stopped being about families, and the houses were sold on to landlords who didn't care about the area."
A council spokesperson said funding had been secured to help cover the costs of CCTV installation in the area. It is hoped that this, along with "general clean-up work", will help revitalise the neighbourhood.
at October 30, 2012