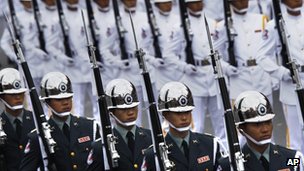 Taiwan has arrested three retired military officers suspected of spying for China, officials say.
One of the officers, identified by local media as Chang Chih-hsin, was the former political warfare head of the meteorology and oceanography office.
The Defence Ministry has said that Mr Chang did not leak sensitive material.
But local media warn his department handled highly classified data, including maps for submarines, hidden ambush zones and coastal defence areas.
"Chang, who initiated contacts with Chinese mainland officials while still serving in the navy, was suspected of luring his former colleagues and making illegal gains," the Defence Ministry said in a statement.
The ministry had been investigating Mr Chang even before he retired in May and visited China in August, reports say.
While a Defence Ministry spokesman has confirmed the arrest of three former military officials, other media reports say that a total of eight officers have been arrested.
The case is raising questions about the increasing practice in recent years of Taiwan's retired officers, including generals, visiting China, says the BBC's Cindy Sui in Taipei.
Relations with China may be at their best in decades, but officials in Taiwan say there has been no reduction in spying by Beijing, our correspondent adds.
In July 2011, an army general was jailed for life for selling military secrets to China - the highest-ranking officer involved in espionage in decades.
Taiwan and China have been governed separately since the end of the civil war in 1949.
at October 29, 2012