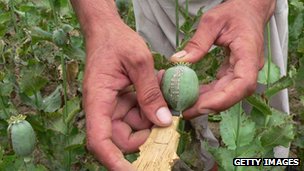 Opium growing has increased in Burma for a sixth year running despite eradication efforts, a UN report says.
The UN Office on Drugs and Crime said land used for opium had risen by 17% this year, from nearly 40,000 hectares (100,000 acres) to 51,000 hectares.
Burma is the second largest opium grower in the world after Afghanistan.
Almost all of the opium it produces is grown in Shan and Kachin states, which have seen longstanding conflict between the military and ethnic rebel groups.
'Toxic combination'
Citing figures from the Burmese government, the report said almost 24,000 hectares of poppy fields had been eradicated in 2012 - about four times the figure in 2011.
Gary Lewis, UNODC representative in South East Asia, said the situation on the ground was "very complex". In areas where opium was grown, there was ''a toxic combination of guns, money and drugs'', he said.
The army and rebel fighters often profit from allowing the trade to continue. Farmers, meanwhile, say the instability means they have little choice but to continue growing the lucrative poppy plant - which is used to make heroin.
Burma accounts for 25% of opium grown in the world, while Laos accounts for 3%, said the report, entitled the South East Asia Opium Survey 2012.
In Laos, land used to grow opium increased almost four-fold between 2007 and 2012 to 6,300 hectares.
The recent rise contrasts with the situation from 1998 to 2006, when both Burma and Laos saw big drops - with an 83% reduction in the case of Burma.
Most of Burma's opium is refined into heroin - about half goes to meet the growing market in China, with the rest being sold across South East Asia.
Part of the reason for the sustained growth in the cultivation of this crop is the demand for heroin in Asia, said the report.
But the good news, in the case of Burma, was that there was now ''momentum to find the solution'', Mr Lewis said.
There is support from President Thein Sein's government, which has embarked on a series of reforms.
Ceasefires and political opening up also meant that international organisations such as the UN now have better access to the areas.
The Golden Triangle - where Burma, Thailand and Laos meet - has been notorious for opium and drug smuggling for decades.
at October 31, 2012