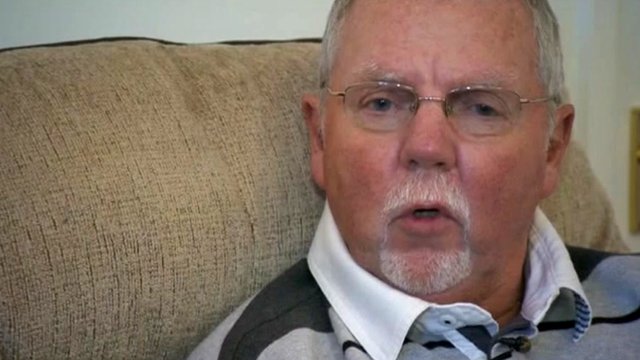 Roger Foster, Jimmy Savile's nephew: "The only conclusion I can come to is there is an awful lot of truth in the allegations."
Continue reading the main story

The nephew of Jimmy Savile says the sex abuse scandal surrounding the late TV presenter has been "devastating".
Roger Foster said he had not believed the allegations at first, but so many had surfaced he was now "convinced that the vast majority of them are true".
He said he could not understand how his uncle, who did so much charity work, "could have such a dark side to him".
Police believe the BBC presenter and DJ could have abused as many as 300 people over a 40-year-period.
Police have launched a criminal investigation into Savile, who died last year aged 84.
Separately, the head of the Catholic Church in England and Wales is trying to have Savile's papal knighthood posthumously removed.
Allegations of sexual abuse have continued to mount up since claims were first made public in an ITV documentary at the beginning of October.
"I said at the time of his funeral that he was my friend, my mentor and my uncle - he was very much like a father to me," Mr Foster told BBC News.
Continue reading the main story

If he was found to be guilty, I would be the first one in line to condemn him”

Roger FosterNephew of Jimmy Savile
"I was horrified when I saw the original programme. As the weeks have gone by, and the various allegations have come out, the number of allegations have been so great that I now believe that the vast majority of them are true."
The scandal had been "totally devastating", said Mr Foster.
"I cannot understand for the life of me how a guy that did so much good in his life - with the work that he did, his charity work, his trusts, the people that he helped - could have such a dark side to him that nobody knew about."
He went on: "I have this memory of what the man was like, what he meant to me as a person. I still have part of me proud of him, not proud of the way things have turned out, but proud of the things that he did in trying to help other people.
"I am so absolutely devastated and disappointed that this dark side is the side that he will be remembered for.
"I'm also devastated and disappointed and very sympathetic towards the people who have kept this dark secret all of their lives.
"I can understand the amount of courage it's taken to come out with it now and actually voice their feelings - it must be a terrible time for them, far harder than it is for me, and it's hard enough for me so I can imagine what they're thinking now." 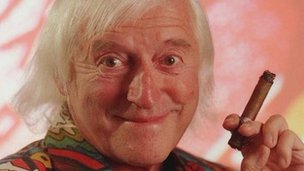 It is thought Savile may have abused scores of young girls and some boys
In an earlier interview with 5 live's Nicky Campbell, he said: "These things we knew absolutely nothing at all about until these revelations have come out now."
They had resulted in the "total annihilation" of Savile's character, and he now thought of his uncle with "great sadness", he said.
If Savile was still alive, "knowing his personality, knowing his character, he would defend himself vigorously", Mr Foster said.
"I earnestly wish that he was still alive, because it would clarify the situation. And if he was found to be guilty, I would be the first one in line to condemn him."
Papal knighthood
Meanwhile, the Archbishop of Westminster, the Most Reverend Vincent Nichols, has written to the Vatican to ask if Savile's papal knighthood can be posthumously removed.
There is no established process to remove a papal knighthood posthumously because the honour dies with the recipient.
A spokesman for Archbishop Nichols said he was making what was "clearly an exceptional request", for Church officials in Rome to investigate the matter, in recognition of the "deep distress" of the late presenter's alleged abuse victims.
Savile was made a Knight Commander of St Gregory the Great by Pope John Paul II in 1990 for his charity work.
The BBC has announced two inquiries as a result of the Jimmy Savile abuse claims, and a further review into the current sexual harassment policies at the BBC.
On Monday, former Court of Appeal judge Dame Janet Smith will begin a review into the culture and practices of the corporation during Savile's time there, and will also examine if the BBC's child protection and whistleblowing policies are fit for purpose.
An independent inquiry led by former Sky head of news Nick Pollard will also examine whether there were any failings in the BBC's management of a Newsnight investigation about Savile which was not broadcast.
at October 27, 2012