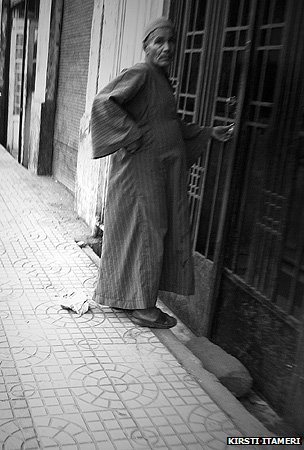 Residents of Cairo cannot simply live as they please - they must always take into account the judgement that will be made of them by the man who sits at the front door of their building.
One of the many things any fresh-faced arrival in Cairo is likely to notice - when lugging bags and suitcases to a new abode - is that there will be somebody sitting in front of it, sternly looking into space with a stare so stoical that it can only have resulted from a lifetime of gazing, sitting and waiting.
In Cairo's hectic maelstrom of activity, there is one person who can take things relatively easy - the doorman, or bewab.
Security guard, porter, enforcer of social mores and general snoop, all rolled into one, the bewab is a quintessentially Egyptian figure, and can be found sitting in front of almost every building in the capital.
Often from Upper Egypt, the bewab brings a distinctly rural flavour to life in the largest, most populous city in Africa. Sporting the long, flowing robes favoured in Egypt's countryside - along with a distinctly non-Cairene dialect of Arabic. Many bewabs are in the city... but not really of it.
Up and down the capital, these rustic imports act as a kind of moral police force, bringing the conservative values of their home districts to the heart of the metropolis.
Forget the anonymity of city life almost anywhere else in the world - in Cairo, your bewab will be keeping a beady eye on the comings and goings of anyone associated with you, especially if they happen to be female.
A quick look at the house listings for foreigners living in the capital reveals the premium that is put on having a liberal - or at least a venal - bewab.
In the selling-points of advertisements, the "laid-back bewab" is a sought-after epithet and is code for a bewab who will conveniently lay aside his moral foibles and leave you well alone, mostly because you are a foreigner.
The mixing of foreigners and Egyptians of the opposite sex, however, is where the trouble really begins.
Continue reading the main story

On the occasions when I have headed up to my apartment with an Egyptian lady, she has often frozen at the sight of my bewab, whom I shall call Uncle Mahmoud, slouched on his plastic deckchair watching the world go by.
"I can't come up to your apartment with him there," hissed one friend of mine, blushing. "I just can't stand him judging me, he'll think I'm a whore!"
To her, and many like her, Mahmoud's opinion really mattered and his moral judgements carried weight, even if they had no basis whatsoever in reality.
I often found it hard to believe that Uncle Mahmoud - the jovial and somewhat annoying man who occupied his days sitting, staring at the front door of my apartment building - could be the object of sheer terror for Egyptian female visitors. 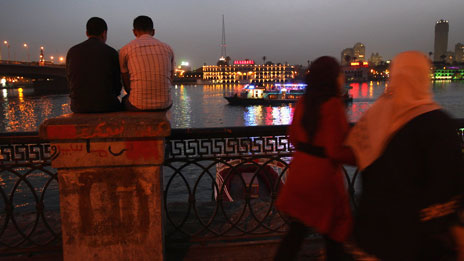 Young people and doormen don't always see eye to eye
This was further reinforced when my Egyptian girlfriend started spending nights at my apartment, apparently without incurring his wrath. The only change I noticed in Mahmoud's behaviour was his joyous salutations and congratulations on the mozza - Egyptian slang for attractive girl - who was visiting me.
In Mahmoud's world, it seemed, the fact that I had a pretty Egyptian woman visiting my apartment, made me a hero. This did not seem like the austere moral enforcer who had so terrified my female friends.
Until, that is, my girlfriend let me know that perhaps the reason Uncle Mahmoud was so happy, was that she had been bribing him every time she came to visit.
Continue reading the main story

It seems my bewab belonged in the venal, rather than the liberal, category. "What on earth for?" I enquired. "I can just tell him to mind his own business."
"True", she said thoughtfully. "But he'd cause a scandal and ruin your reputation in the building. It's easier this way."
After some weeks, I realised what she meant. I had a new bewab by now. Let us call him Uncle Sherif.
He let it be known that he was unhappy with the official contribution I was making to his finances - a nominally fixed rate agreed upon when you sign your housing contract. Sherif wanted more.
I refused, unable to accept the idea that I should be paying reputational protection money simply because I had Egyptian visitors.
The payback came soon enough. A friend of mine on the street informed me Sherif had been openly speculating about why a Westerner would be visited by Egyptian females, and the word was I must be a naswangi - a womaniser.
I confronted him. The game was up. Throwing his arms wide in an exaggerated embrace, Sherif kissed me on both cheeks, apparently a sign of sincere apology and respect.
From that point onwards, my bewab has never again looked me in the face, and the rumours - I have been reliably informed - have stopped.