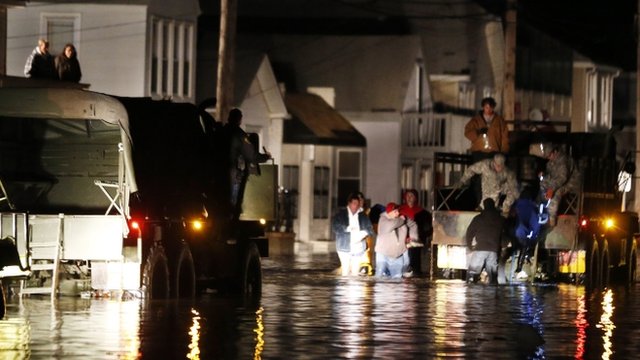 At least 40 people have been killed, millions have no power and transport has been crippled across the north-eastern US as storm Sandy heads north.
In New York City, 18 people have been killed and the flooded subway remains closed until further notice.
More than 18,000 flights were cancelled, though reduced services are to resume in New York and New Jersey.
President Barack Obama, who has suspended his election campaign, is due to visit affected areas in New Jersey.
The storm was causing heavy snowfalls over West Virginia on Tuesday afternoon. It was due to turn towards western New York state before moving into Canada on Wednesday.
Though forecast to weaken, it was expected to cause heavy rain and flooding.
Earlier, Sandy killed nearly 70 people as it hit the Caribbean.
'Devastating storm'
Continue reading the main story

Paul AdamsBBC News, New Jersey
Having removed himself from the election campaign to concentrate on the storm, President Obama will now see at first hand just how destructive Hurricane Sandy has been. He'll travel to Atlantic City where the Republican governor, Chris Christie - normally a fierce critic - will show him scenes of widespread destruction along the Jersey Shore. They'll meet some of those who have lost homes, as well as the emergency teams who have been working around the clock since the weekend.
Across several states, tens of thousands of people spent a second night in school gymnasiums, community centres and hotel rooms, with or without electricity. In a converted detention centre in Teterboro, across the Hudson River from upper Manhattan, I found evacuees receiving food and a bed for the night, but anxious about their flooded homes. In the nearby communities of Little Ferry and Moonachie, the streets were dark, deserted and, in some places, still under water.
At least eight million homes and businesses are without power because of the storm, says the US Department of Energy.
Sandy brought a record storm surge of almost 14ft (4.2m) to central Manhattan, well above the previous record of 10 feet (3m) during Hurricane Donna in 1960, the National Weather Service said.
"This was a devastating storm, maybe the worst that we have ever experienced," New York Mayor Michael Bloomberg said.
New York's subway system sustained the worst damage in its 108-year history, said Joseph Lhota, head of the Metropolitan Transit Authority (MTA).
Subway tunnels were flooded and electrical equipment will have to be cleaned before the network can re-open.
Mr Bloomberg said there was "no timeline" for when the subway would restart, but he hoped buses could begin running again on Wednesday.
It is likely to be two or three days before power is restored to most of the city, Mr Bloomberg said.
John F Kennedy airport and Newark in New Jersey are due to reopen at 07:00 (11:00 GMT) on Wednesday, with a reduced service, though New York's LaGuardia airport will stay shut.
The New York Stock Exchange says it will also re-open after two days' closure, as will the Nasdaq exchange. The last time the stock exchange shut down for two days was in 1888.
Continue reading the main story

The greatest storms on Earth 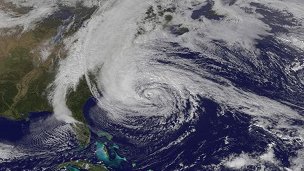 The Path commuter train service, which links New Jersey and New York City, is likely to remain suspended for seven to 10 days, New Jersey Governor Chris Christie told a news conference.
The tidal surge from the storm left fields of debris 7ft (2.25m) high and carried small railway goods cars onto elevated sections of the New Jersey Turnpike, he said.
President Obama was due to tour disaster areas in New Jersey on Wednesday with Governor Christie.
Mr Christie, a Republican and staunch supporter of Mr Romney, went out of his way to praise the Democratic president for his handling of the storm.
"I spoke to the president three times yesterday," Mr Christie told CNN. "He's been incredibly supportive and helpful to our state and not once did he bring up the election... If he's not bringing it up, I'm certainly not going to bring it up."
Republican presidential candidate Mitt Romney resumed low-key campaigning on Tuesday, converting a rally into a storm relief event in the swing state of Ohio.
The cost of clearing up after the storm is likely to run to $30-40bn (£18-24bn), says the BBC's business correspondent Mark Gregory - far less than than the $100bn cost of clearing up after Hurricane Katrina in 2005.
In other developments:
President Obama has also declared emergencies in Massachusetts, Connecticut, Rhode Island, New Jersey and Pennsylvania.

Are you or have you been affected by Hurricane Sandy? What is the situation in your area? Send us your experiences using the form below.
Send your pictures and videos to yourpics@bbc.co.uk or text them to61124 (UK) or +44 7624 800 100 (International). If you have a large file you can upload here.
at October 31, 2012

It's nearly impossible to find educated people in this particular subject, but you seem like you know what you're talking about!
Thanks