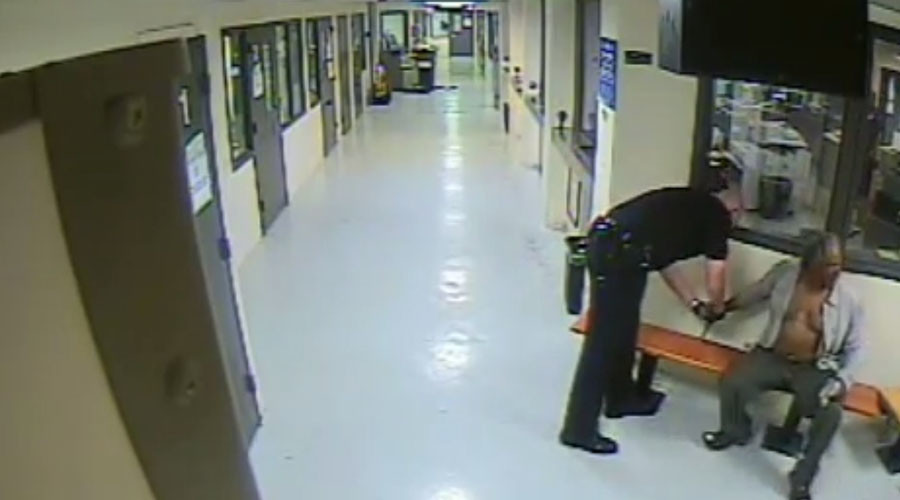 © ProPublica / YouTube
AddThis Sharing Buttons
4
New video footage has emerged showing the final moments of a grandfather of seven, who died less than an hour after being taken into custody by the Los Angeles Police Department. The clip even shows officers laughing at the man after they had tasered him.
TrendsPolice brutality
Fifty-six-year-old Vachel Howard was arrested and taken into custody in June 2012 by the Los Angeles Police Department (LAPD), after he was found driving erratically. However, less than an hour later, he would be pronounced dead at the Good Samaritan Hospital.
WARNING: GRAPHIC CONTENT
Over four years later, video footage was published and obtained by ProPublica, which shows the scale of abuse against the man, with a coroner stating that a chokehold administered by one of the officers was one of the causes of his death.
Despite telling officers that he suffered from schizophrenia, he was strip-searched as the police believed he was high on cocaine. The video footage appears to show that a scuffle ensued which was out of vision. However, Howard reappears in frame as he tries to get away from the police.
Read more

2nd anniversary of Michael Brown's death: What's changed?
The video shows that the 56-year-old is violently thrown to the ground and tasered five times by officers. Despite receiving numerous electric shocks, six officers tried to subdue him as they described Howard as having “super-human strength.” Howard was described as being 1.72 meters tall and weighing 112kg.
One officer can be seen with his knee planted in Howard’s back, while Officer Juan Romero held the grandfather of seven in a headlock.
“Detention Officer A placed his right arm around the subject’s neck, with his right bicep pressed into the right side of the subject’s neck, and his right forearm pressed into the left side of the subject’s neck,” a commission said, that summed up Romero’s actions, as cited by ProPublica.
“Detention Officer A cupped his left hand over his right wrist, and applied downward pressure with his bodyweight as the subject tried to push off the floor with his right hand,” the commission added.
Romero later said that he had applied the chokehold for “just a few seconds” and that he had done so because Howard had tried to bite him.
Howard was left motionless and attempts by the officers to wake him proved unsuccessful, so a nurse was called. However, while the nurse went to retrieve her stethoscope, the police officers can be seen laughing and smiling on the video footage.
Read more 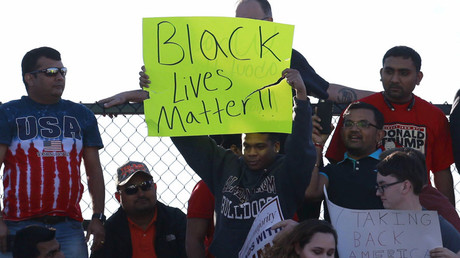 Why black lives matter: 6 high-profile killings enraging America
When the nurse retuned, she had trouble in trying to assess Howard, who was still lying motionless. After she could not hear his heartbeat, she called for an officer to call for an ambulance, which arrived nine minutes later.
Paramedics were unable to revive him after they arrived at the scene and a coroner’s report found hemorrhages and fractured cartilage in Howard’s neck.
“Mr. Howard posed no threat whatsoever,” V. James DeSimone, the lawyer representing Howard’s children, told ProPublica. “He was down on the ground, six officers on top of him, no guns in the nearby vicinity [and] executing a chokehold where there was no threat to the officers or to anybody else. It’s out of policy, it’s unlawful, and in this case it’s murder.”
Romero, who was accused of holding Howard in a chokehold, was suspended for 22 days, while the prosecutors decided not to pursue a case against him and defended his actions.
“Given what were indisputably tense and rapidly evolving circumstances, Officer Romero’s decision to apply and upper body hold on the decedent was justified,” the filing said, as cited by ProPublica.
In October 2015, the City of Los Angeles agreed to pay Howard’s family $2.85 million to settle a claim of wrongful death. However, for Tushana Howard, his daughter, the money is not going to return her father.
“It sort of says that we don’t matter because we don’t have the badge backing us,” she said. “They matter more than we do. It’s more important for them to go home to their families instead of the people they come in contact with to return to their families as well.”
at August 20, 2016