© Navesh Chitrakar / Reuters
AddThis Sharing Buttons
378
A team of US and Brazilian researchers have used a synthetic sex hormone to stimulate production of a naturally occurring enzyme called telomerase that is capable of reversing ageing and has been dubbed a possible “cellular elixir of youth.”
While in embryos, telomerase is expressed by practically every cell. It can then only be produced in cells that are constantly dividing, such as blood-forming stem cells, which can differentiate into various specialized cells, scientists say. Certain cells avoid aging by using telomerase to lengthen their telomeres, which are DNA-protecting structures at the ends of chromosomes. The length of telomeres is a laboratory measure of a cell’s age, as each time a cell divides, its telomeres get shorter.
Read more 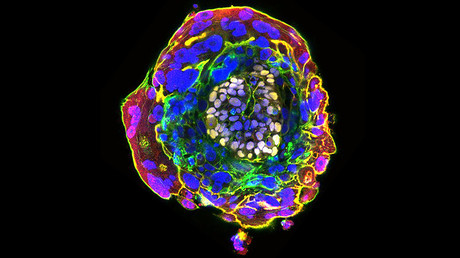 13-day-old human embryo grown in lab for controversial record-breaking study
“In a healthy adult, telomere length varies from 7,000 to 9,000 base pairs on average. A normal person’s telomeres lose 50 to 60 base pairs per year, but a patient with telomerase deficiency can lose between 100 and 300 base pairs per year,” said Professor Rodrigo Calado, one of the scientists behind the research, the results of which were publishedin the New England Journal of Medicine.
Telomerase deficiency may cause some blood-related diseases, such as aplastic anemia. In the recent study, scientists treated 27 patients having telomere diseases with a steroid called danazol, a synthetic male hormone, leading to telomere elongation.
“In the patients who received danazol, telomere length increased by 386 base pairs on average over two years,” Calado said.
The research was based on previous findings that showed that androgens, which are converted into estrogens in humans, bind to female hormone receptors in the telomerase gene promoter region, stimulating expression of the enzyme in cells. The latest study “was designed to find out whether the effect we’d observed in the lab also occurred in humans, and the results indicate that it does,” the professor said.
While finding that sex hormones may be used to reverse one of the biological drivers of aging, researchers are cautious, as the risks of using the treatment in healthy people are not yet clear.
at July 29, 2016