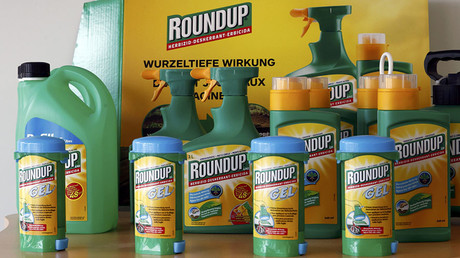 EU may ban Monsanto weedkiller over health concerns
All of the soybeans have gone through a comprehensive authorization procedure, including a favorable scientific assessment by the European Food Safety Authority (EFSA). The approved seeds include Monsanto’s Roundup Ready 2 Xtend.
Following the Commission’s approval Monsanto’s GMO soybeans are now authorized to be used both to feed animals and in human food, but not for planting in the EU. The authorization is now valid for 10 years but the EU warned that “any products produced from these GMOs will be subject to the EU’s strict labeling and traceability rules.”
Although Roundup Ready 2 Xtend soybeans are tolerant to both glyphosate and dicamba herbicides, the use of dicamba herbicide over the top of Roundup Ready 2 Xtend soybeans remains in the late stage of Environmental Protection Agency (EPA) review and is not currently approved by the EPA.
The soybeans had been approved earlier this year by top importer China. Monsanto now plans to supply 15 million US soy acres to the export needs, the company said in a statement.
“With both the EU and Chinese import approvals and the US Environmental Protection Agency (EPA) in the final stages of review for over-the-top use, Monsanto can now look forward to a full system launch in the United States in 2017 and continues to be in a strong position to supply roughly 15 million U.S. soy acres when the selling season arrives,” the company said.
The new GMO crops – coupled with the dicamba/glyphosate cocktail – make up what Monsanto has dubbed the 'Roundup Ready Xtend crop system,' designed to trump super weeds that have evolved along with the company’s glyphosate-based Roundup biocide.
READ MORE: March against Monsanto: Global protests
Dicamba was first approved in 1967 and has been linked to high rates of cancer and birth defects in the families of food growers, according to government and other scientific studies. Consumer, health, environmental, and farmer advocates have fiercely opposed the new Xtend system over health and environmental concerns.
Europe is the second largest soybean customer as it relies on soybeans to meet demand for meat and dairy products. The entire block produces less than 1 million tons of soya a year, while importing around 35 million tons, according to the World Wide Fund for Nature.
at July 24, 2016