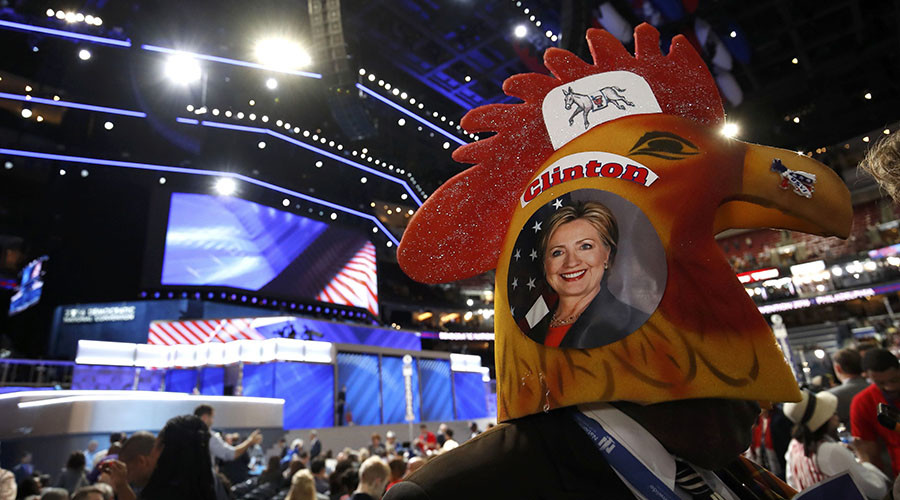 A delegate wearing rooster headgear with a picture of Democratic U.S. presidential candidate Hillary Clinton on the side walks across the floor of the convention during the second night at the Democratic National Convention in Philadelphia, Pennsylvania, U.S., July 26, 2016. © Jim Young / Reuters
AddThis Sharing Buttons
1
Hillary Clinton has officially become the Democratic Party’s presidential nominee, securing the support of delegates in the roll-call, despite sharp divisions and mass disappointment of Sanders’ delegates.
TrendsUS Conventions 2016
FOLLOW RT’s DNC LIVE UPDATES
The roll-call vote has officially ended the race of the “disappointed” Vermont Senator Bernie Sanders, Clinton’s only party rival in the fight for the nomination.
Sanders, who officially endorsed the former Secretary two weeks ago, has spent the first two days of the convention in Philadelphia calling on his delegates and supporters to back Clinton as the only way to unite and defeat Donald Trump in November.
In a move meant to signify that unity, the Vermont senator has reportedly asked that his state vote last in the roll-call, despite the alphabetical order, so that he could see how Washington and Wisconsin cast their ballots before calling for Clinton to be nominated by acclamation.
The Democratic roll call vote on the party’s official nomination has shown strong support for Sanders, whose name was also put forward on the floor. The procedure has been said to be “mostly symbolic” and is widely seen as a gesture for the thousands of disappointed Sanders’ supporters that have been protesting Hilary Clinton’s nomination since Day One of the Convention.
The Vermont Senator, who has not yet officially suspended his presidential campaign, managed to secured the support of 1,894 delegates, versus Clinton’s 2,807. However, he still came up short of clinching the official nomination, which requires 2,383 delegates.
READ MORE: Sanders urges supporters to stop booing & support Clinton to beat Trump
Sanders has been urging his delegates to support Clinton with their votes, a call that has been met with loud boos by his supporters.
The crowd erupted with chants “We want Bernie!” and “Take it to the floor!” drowning out chants of “Hillary! Hillary!” from Clinton supporters.
“We have got to obviously elect Hillary Clinton,” Sanders told delegates from Wisconsin, Montana, and Alaska on Tuesday.
READ MORE: Activists demonstrate against ‘warmongering’ Hillary Clinton at DNC
Despite Sanders’s calls for the party to unite behind his rival, his supporters took to the streets under the burning sun for the second day on Tuesday, chanting “Bernie or bust!”
at July 26, 2016