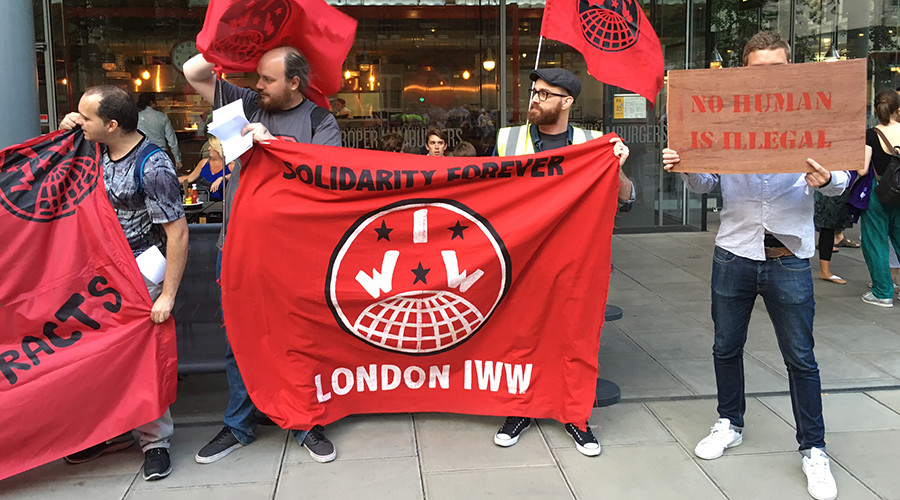 A protest outside a Byron branch in London on Friday, July 29 © Richard Sudan
AddThis Sharing Buttons
8
Radical activists released thousands of cockroaches, crickets and locusts at two outlets of Byron Hamburgers, a chain that helped the Home Office deport its migrant staff earlier this month. Protesters say they will bankrupt Byron if it doesn’t apologize.
The London Black Revolutionaries and the Malcolm X Movement forced the shutdown of the upmarket burger chain’s St. Giles and Holborn branches on Friday night by unleashing what they said were 8,000 crickets, 4,000 cockroaches, and 1,000 locusts in front of bemused customers.
The Malcolm X Movement, which calls itself a “Black & Asian led anti-imperialist decolonial organization” on its Facebook page, has published a manifesto explaining why it decided to take “affirmative action.”
In their post, they say that the chain has to “pay for their exploitative misdeeds,” saying they will “ensure it is shut down”until it goes bankrupt or compensates the deported staff and apologizes to them. They also declared that this is “a warning to other businesses,” which will also be “targeted.”
“We’ve got a feeling Byrons [sic] will be closed for a few days on account of fumigation... This is just the beginning. Strike them were it hurts,” wrote the London Black Revolutionaries on their Facebook page, addressing their 11,000 followers.
The Malcolm X Movement said that the stunt had wider significance “in the context of growing racist and even fascist oriented policies encouraging and fostering mass resentiment, [sic] racism and xenophobia towards ethnic and migrant communities.”
Read more

Exploitative bosses, populist politicians to blame for rise in immigration raids - rights group
In an operation that took place on July 4, but was not made public until this week, about 35 employees were called into a meeting, ostensibly to teach them a new method for cooking beef patties, according to eyewitness testimonies in the UK media. However, when staff arrived, the kitchen and floor workers, who were from Albania, Brazil, Nepal, and other non-EU states, were rounded up. Some of them have since been deported. Unconfirmed media reports claim that as many as 150 other employees went into hiding following the sting.
UK authorities said the chain, which would have faced fines of up to £20,000 per employee for knowingly employing migrants without a legal permit, had been shown “counterfeit documents” when hiring them. Byron said it “co-operated fully and acted upon the Home Office’s requests throughout the course of the investigations leading to this action.”
Despite being in compliance with existing UK immigration laws, the operation drew fury from a segment of social media and, by Friday, several of Byron’s London and Bristol outlets were being picketed by small groups of activists before the insect-releasing stunt was launched. 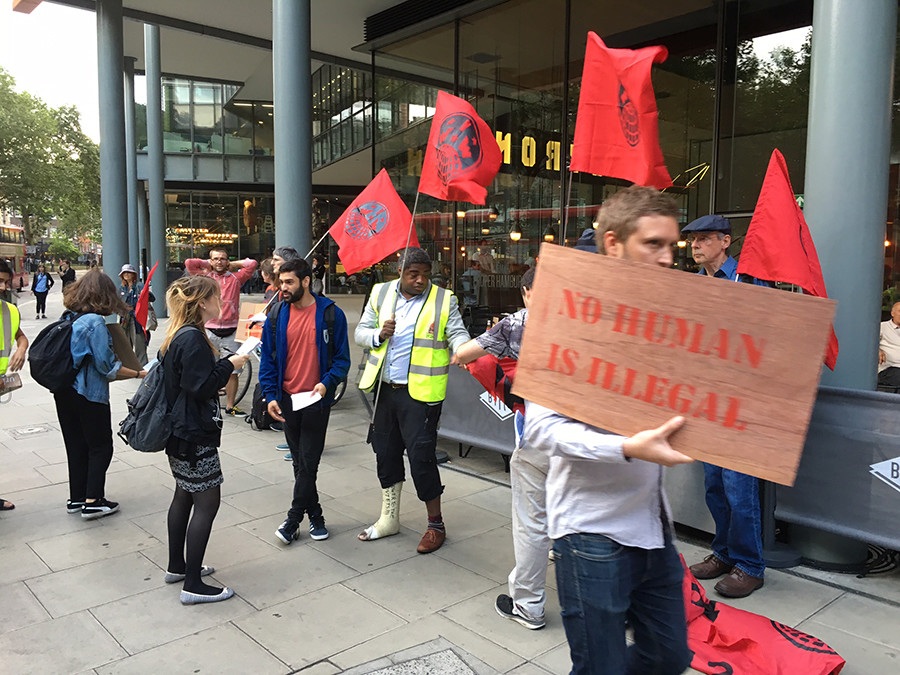 © Richard Sudan
The decision to use direct action to sabotage restaurant outlets has received mixed public reaction, with many pointing out it would be the staff that would have to round up the insects and lose income if a branch was forcibly shut for several days. Moreover, if the chain as a whole was forced into bankruptcy, as threatened by the activists, the employees would have to find new jobs.
Founded in 2007, the upmarket Byron Hamburgers chain has been rapidly expanding and now employs over 1,300 people at 56 branches. It first caught the media’s eye when former Chancellor George Osborne was pictured eating one of their takeaway offerings in his office in 2013.
While the Home Office raid was not directly related to Brexit and intra-EU migration, the passionate public reaction comes against a backdrop of rising ethnic tension, which police say has resulted in 57 percent more complaints of xenophobia since the June vote.
at July 30, 2016