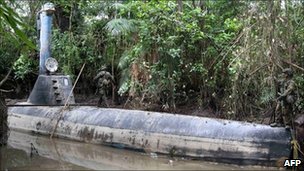 The authorities in Argentina say they have detained a Colombian man they accuse of being the brains behind the submarines used to smuggle drugs to the United States.
Ignacio Alvarez Meyendorff is suspected of working for the once-powerful Colombian Norte del Valle drug cartel.
Mr Alvarez denies the allegations.
Drug traffickers are increasingly using submarines to avoid being caught by the security forces patrolling the water's surface.
Deputy Security Minister Miguel Robles said Mr Alvarez was arrested on Sunday with help from the US Drug Enforcement Administration, but news of his arrest were only made public on Wednesday.
Mr Robles accused Mr Alvarez of being in charge of the logistics behind the underwater smuggling scheme, and of perfecting the system.
He said Mr Alvarez was detained as he arrived in Buenos Aires on a flight from Tahiti.
Local media reported that he had been living in Argentina since 2005, and had resided in an exclusive area of the Puerto Madero neighbourhood.
at April 28, 2011