Controlling access to the Red Sea, Djibouti is of major strategic importance, a fact that has ensured a steady flow of foreign assistance.
During the Gulf War it was the base of operations for the French military, who continue to maintain a significant presence.
France has thousands of troops as well as warships, aircraft and armoured vehicles in Djibouti, contributing directly and indirectly to the country's income. The US has stationed hundreds of troops in Djibouti, its only African base, in an effort to counter terrorism in the region.
Djibouti's location is the main economic asset of a country that is mostly barren. The capital, Djibouti city, handles Ethiopian imports and exports. Its transport facilities are used by several landlocked African countries to fly in their goods for re-export. This earns Djibouti much-needed transit taxes and harbour fees. 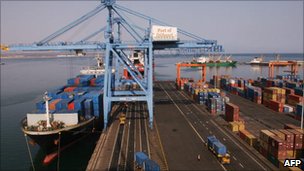 The Port of Djibouti on the Red Sea is the main shipping terminal for the Horn of Africa
After independence from France in 1977, Djibouti was left with a government which enjoyed a balance between the two main ethnic groups, the Issa of Somali origin and the Afar of Ethiopian origin.
But the country's first president, Hassan Gouled Aptidon, installed an authoritarian one-party state dominated by his own Issa community. Afar resentment erupted into a civil war in the early 1990s, and though Mr Gouled, under French pressure, introduced a limited multi-party system in 1992, the rebels from the Afar party, the Front for the Restoration of Unity and Democracy (Frud), were excluded.
Thus, Mr Gouled's Popular Rally for Progress party won every seat and the war went on. It ended in 1994 with a power-sharing deal which brought the main faction of Frud into government. A splinter, radical faction continued to fight until 2000, when it too signed a peace deal with the government of Gouled's successor, Ismael Omar Guelleh.
at April 29, 2011

Wow, this article is good, my sister is analyzing these kinds
of things, thus I am going to let know her.