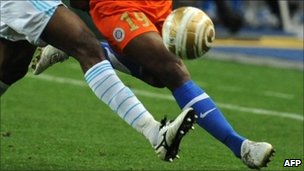 The French Football Federation's (FFF) national technical director Francois Blaquart has been suspended from his post with the organisation.
The move comes amid claims of a secret racial quota for trainees.
Senior FFF members were said to have secretly approved limiting the number of black and Arab players to 30% from the age of 12-13.
Blaquart and French national team coach Laurent Blanc said the comments were taken out of context.
A probe into the allegations made by French website Mediapart is expected to be completed within eight days.
Sports Minister Chantal Jouanno and FFF president Fernand Duchaussoy suspended Blaquart on Saturday.
"The suspension is pending the conclusions of an investigation led by the FFF and the IGJS [General Inspection of Youth and Sports]," Jouanno said in a statement.

Hugh Schofield BBC News, Paris
Only barely emerging from the embarrassment at last year's world cup in South Africa, France's football federation is now embroiled in another row, this time over racism.
But defenders of French football's managing body say that reporting of this row has been one-sided. The issue under discussion was the high number of players going through the excellent French national training system who play for French national teams at junior level and then defect to other national teams, many in Africa, at senior level.
At last year's World Cup, for example, there were nine players on other sides who had previously played for France. This is the tendency that the federation wants to limit.
But by letting discussion at this meeting run into broader stereotypes, about big physical black players versus small skilful white ones, it has strayed into very dangerous territory.

On Thursday, Mediapart, citing sources within the FFF, said Blaquart proposed to enforce racial quotas to limit the number of players of black or Arab origin in youth academies.
On Saturday, Mediapart published a verbatim report of a meeting at which France coach Laurent Blanc, Blaquart, under-21 coach Erick Mombaerts and under-20 coach Francis Smerecki, among others, had a debate over players with dual nationality groomed in France eventually opting to play for their country of origin.
At one point Blaquart says there should be an unofficial policy of keeping down the number of mainly black and North African youngsters with dual nationality in French training centres.
Blanc is also cited as saying he is "very much in favour" of a quotas.
Mediapart's editors say the report is evidence of blatant racism.
Blaquart told RMC radio's website: "I cannot not acknowledge these remarks.
"They have to be put in their context. We acknowledged the fact that there were many players with dual nationality... we had to control the management of these players who might be leaving us. There is nothing more to it."
Blanc strongly denied plans for any quotas on Friday, and on Saturday said he stood by his comments.
"I admit that some remarks made during a work meeting... taken out of their context, may be misinterpreted and, as far as I am concerned, I apologise if I have hurt some feelings.
"But I, who am against any form of discrimination, do not stand being accused of racism or xenophobia."
FFF president Fernand Duchaussoy had also denied there were any instructions to limit the number of black or Arab players.
at April 30, 2011