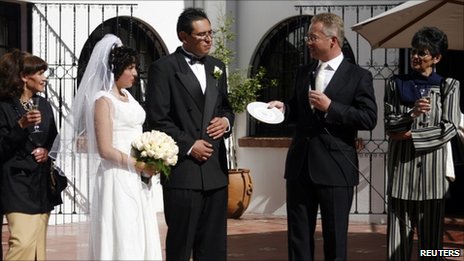 A Bolivian couple who happened to be getting married on the same day at Prince William and Kate Middleton have celebrated their wedding at the British Embassy in La Paz.
UK ambassador Nigel Baker said he wanted to show that "this is a human event as well as a grand state event".
He sent his ambassadorial car to fetch Fabianna Rivera and Alejandro Antezana for a champagne reception.
"We are so happy today" the bride said. "We didn't know it was the same date."
Mr Baker contacted a number of couples who had planned to marry on 29 April, and chose one by ballot to attend a special ceremony at the embassy.
"There is no better way to celebrate a wedding than with another wedding," he said.
The pair were presented with a souvenir royal wedding plate before a champagne toast. 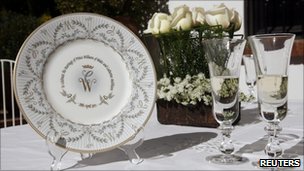 The couple and their guests were served champagne
Mr Antezana said he and his bride were thrilled to share the day with Kate and William.
Mr Baker had risen before dawn to watch the London wedding on television before welcoming the local couple to the embassy later in the day.
"All us young girls dream and hope for our own prince and I am sure that I'm marrying mine,» said Ms Rivera, 24.
After the celebrations at the embassy, the couple were married at a Roman Catholic church in La Paz.
at April 30, 2011