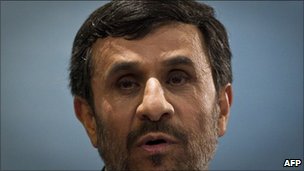 Powerful MPs in Iran have called for a closed debate on President Mahmoud Ahmadinejad's apparent boycott of his official duties.
The president has not been seen at his office for eight days, missing two cabinet meetings and cancelling a visit to the holy city of Qom.
Iran's supreme leader, Ayatollah Khamenei, recently re-instated a cabinet minister he had pushed out.
Analysts believe an internal power struggle may be under way.
Parliament has tacitly threatened the president with impeachment, the BBC's Mohsen Asgari in Tehran reports.
Intelligence Minister Heidar Moslehi was forced to resign on 17 April but promptly re-instated by the supreme leader.
Nearly 300 MPs urged Mr Ahmadinejad, in a letter, to respect Ayatollah Khamenei's decision.
While the president has not been seen at government meetings, Mr Moslehi attended a cabinet meeting last Sunday, the Associated Press news agency reports.
One unnamed reformist politician told the BBC that a "game of chicken" had begun.
"I hope one side yields at the end - otherwise it will move the country toward unprecedented instability that will certainly suck the current Arab uprisings into the country," the politician added.
at April 30, 2011