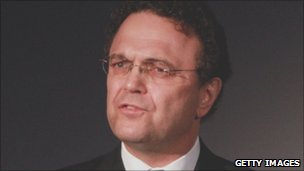 German police have arrested three suspected members of al-Qaeda who posed a "concrete and imminent" threat, officials said.
German Interior Minister Hans-Peter Friedrich said the arrests by "domestic intelligence services and foreign partner organisations" had averted a serious incident.
The trio had been under surveillance for two weeks, prosecutors said.
They will be brought before a judge on Saturday.
The prosecutor's office in the southwestern city of Karlsruhe said the three suspects had been arrested early on Friday, but did not give further details.
Germany's Bild newspaper, citing security sources, reported that the three were Moroccans living in the western German state of North Rhine-Westphalia.
AP news agency quoted Mr Friedrich as saying that the case showed Germany was still a target of international terrorists.
at April 29, 2011