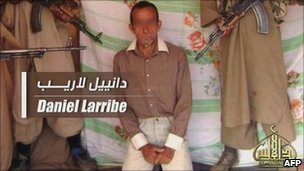 Four Frenchmen seized in September by al-Qaeda militants in Niger have been shown in a video asking for France to quit Afghanistan.
All four give the same message that President Nicolas Sarkozy should pull French troops out of the international peacekeeping force.
Militants can be seen training gun barrels on them as they speak
Two men and a woman kidnapped along with them in the uranium mining town of Arlit were freed in January.
It is believed the remaining hostages are being held in secret camps in the deserts of neighbouring Mali.
France said it would not negotiate after the group, al-Qaeda in the Islamic Maghreb (AQIM), demanded a ransom of 90m euros (£80m, $131m).
Security experts say AQIM has previously collected millions of dollars in ransom payments, Reuters news agency notes.
'Not dictated by hostage-takers'

The video, released on Islamist web forums, shows still images of the four men, Pierre Legrand, Daniel Larribe, Thierry Dol and Marc Furrer.
Their words are contained in an audio message played over the stills and the recordings are said to have been made on 11, 12 and 13 April.
In Paris, Laurent Wauquiez, the secretary of state for European affairs, said: "The first thing we need to do is analyse the video and notably make sure it proves the hostages are alive.
"Secondly, we're doing everything, and I mean everything we can, to get the hostages released. As you can imagine, French foreign policy is not dictated by hostage-takers."
The hostages taken in September were working for either French nuclear energy firm Areva or French construction company Vinci.
at April 27, 2011