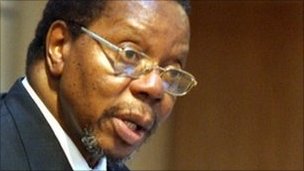 Malawi has reportedly ordered the UK's High Commissioner to leave the country after he was quoted in a leaked cable as saying the president does not tolerate criticism.
A British diplomat warned of "serious consequences" over Fergus Cochrane-Dyet's expulsion, according to an internal memo seen by the BBC.
Some 40% of Malawi's budget comes from abroad; the UK is the largest donor.
No Malawian officials were available to comment on the reported expulsion.
The British Foreign and Commonwealth Office could also not confirm that Mr Cochrane-Dyet had been ordered out of Malawi.
But a spokesman said that Malawi's charge d' affaires had been summoned last week and told of the UK's concern at reports of the decision to deport him.
According to the diplomatic cable published by the local Weekend Nation newspaper last week, Mr Cochrane-Dyet described Malawi's President Bingu wa Mutharika as "becoming ever more autocratic and intolerant of criticism".
He said local civil society activists were afraid after a campaign of threatening phone calls.
"I am sorry to pass on the news that the Malawi Government have officially informed the Foreign and Commonwealth Office today [Tuesday] that Fergus is being declared persona non grata," reads the memo signed by British High Commission Vice-Consul Lindsay McConaghy.
In the memo, Foreign Affairs Minister Etta Banda was quoted as telling Mr Cochrane-Dyet that "Malawi has lost confidence in you".
Malawi government spokesman Vuwa Kaunda told the BBC's Raphael Tenthani in Blantyre that the issue was "highly sensitive".
Ms McConaghy said no Malawian government representative would be invited to the celebration of Queen Elizabeth II's official birthday.
Malawi is one of the poorest countries in the world, with an estimated 75% of the population living on less than $1 (60p) a day.
Mr Cochrane-Dyet was quoted as saying that these would be the people who would suffer most if aid was cut.
at April 27, 2011