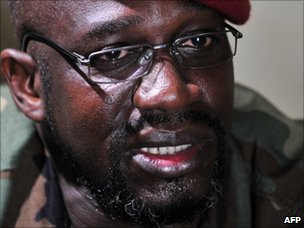 One of Ivory Coast's best-known militia leaders has been killed by the forces of new President Alassane Ouattara.
The leader of the so-called Invisible Commandos, Ibrahim Coulibaly, was killed in an offensive on Wednesday, a defence ministry spokesman said.
Mr Coulibaly's forces had helped Mr Ouattara gain control of parts of Abidjan during the recent crisis but the pair had since fallen out.
He has been involved in several coup attempts over the past decade.
He played a key role in the 2002 uprising which split the country until Mr Ouattara's forces toppled former President Laurent Gbagbo two weeks ago.
Mr Coulibaly, 47 and widely known as "IB", had served as Mr Ouattara's personal bodyguard.
But he has been reluctant to disarm his fighters, as he was said to be seeking recognition of the role they played in ousting Mr Gbagbo, who refused to accept defeat in last year's election.
The BBC's John James in the main city, Abidjan, says Mr Coulibaly's death eliminates a potential cause of instability for the new government.
But our correspondent says the internal fighting among the coalition of former warlords that brought President Ouattara to power and over which he has limited control remains a worrying sign.
Commercial banks are due to open on Thursday for the first time since February, as the new government tries to restore normality to the world biggest cocoa producer, which used to enjoy the highest living standards in West Africa.Continued
at April 28, 2011