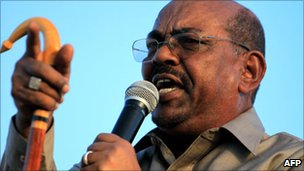 Sudan's President Omar al-Bashir has threatened not to recognise the new state of South Sudan if it tries to claim the disputed Abyei region.
South Sudan will become independent in July after deciding in a referendum to split from the north.
Oil-producing Abyei should also have had a vote in January on whether to join north or south, but it was delayed by a dispute over who should vote.
An estimated 1.5 million people died in the two-decade north-south civil war.
There have been several deadly clashes in Abyei since January, when the referendum was supposed to have been held under the terms of the 2005 peace accord that ended the civil war.
'We shall not let go an inch' For months, President Bashir has insisted he would be the first to recognise the new country of South Sudan when it secedes on 9 July.
But the BBC's James Copnall in Khartoum says neither the north nor the south has shown any sign of backing down over Abyei.

A draft version of South Sudan's interim constitution explicitly claims Abyei is in the south.
President Bashir, and the Arab Misseriya nomads, are equally adamant the region is in the north.Continued
at April 28, 2011