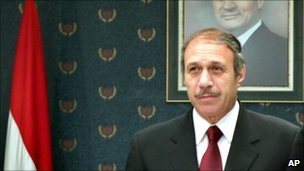 Egypt's former interior minister, Habib el-Adly, has gone on trial accused of ordering the shooting of protesters during the country's revolution.
Nearly 850 civilians were killed during an 18-day popular uprising that forced President Hosni Mubarak from power. Most were shot in the head and chest.
The trial of Mr el-Adly and six former aides opened amid tight security at a courthouse in a suburb of Cairo.
He could face the death penalty if convicted, but pleaded not guilty.
The court was packed with lawyers and relatives of the defendants. Outside there were small protests that included the families of those killed, who were not granted access.
Mr el-Adly is accused of instructing security forces to open fire on unarmed activists during the protests, which started on 25 January.
He is also charged with withdrawing police officers from the streets on 28 January.
The removal of police led to chaos and widespread looting, with householders forced to guard their own properties.
Mr el-Adly pleaded not guilty and his trial was adjourned until 21 May.
Ongoing investigations As head of Egypt's domestic security services, the former interior minister was a hate figure for protesters. They demanded his removal from office and an end to the emergency law which gave wide powers to his forces.
Mr el-Adly has already begun a trial for embezzlement.
He has also been accused of illegally profiteering - along with former Prime Minister Ahmed Nazif and the former Finance Minister Yousef Boutros-Ghali - from a deal to import new vehicle licence plates. 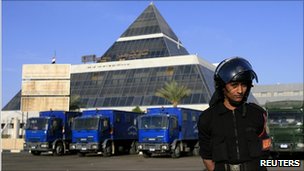 The public prosecutor has announced that Hosni Mubarak will be moved to a military prison.
Hosni Mubarak, the former president, remains in detention at a hospital in the Red Sea resort of Sharm el-Sheikh after suffering from heart problems during interrogation.
The public prosecutor has ordered him to be moved to a military hospital as he is investigated over the violent suppression of the protests and alleged corruption.
Mr Mubarak's sons, Gamal and Alaa, are also being questioned.
They are being held in Tora prison in Cairo, along with a growing number of former officials from their father's government, including Mr el-Adly.
Egypt's new military rulers have promised that those responsible for abuses of power will be brought to justice.


More on This Story