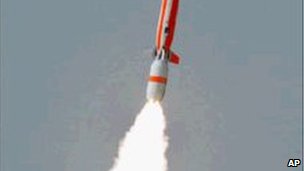 Pakistan has carried out a successful test of a cruise missile capable of carrying nuclear weapons, military officials say.
Hatf-VIII (or Raad, "thunder" in Arabic) was first tested in 2007 and has a range of 350km (220 miles).
India and Pakistan regularly test their missile systems and they normally notify one another ahead of such tests.
Tension between Pakistan and India has decreased in recent months after a series of bilateral overtures.
Hatf-VIII was first tested in August 2007. Experts say several tests are required before any missile can be deployed.
at April 29, 2011