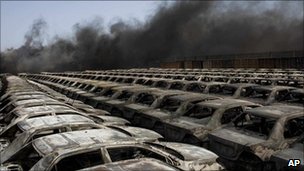 At least 11 rebel fighters have been killed in a Nato air strike in the besieged Libyan port city of Misrata, say reports.
A rebel commander and witnesses told reporters a Nato warplane had carried out Wednesday's bombing.
Nato said it had carried out a strike but could not confirm rebel vehicles were hit.
Later, government troops were reported to have re-taken Kufra in the south and a crossing on the Tunisian border.
The Wazin border post - near the Tunisian town of Dehiba - had been seized by rebels last week. Fighting is reported to have spilled into Tunisian territory, along Libya's western border
Rebel 'reluctance' Misrata has been the scene of intense fighting because of its strategically crucial port.
Rebel fighters, backed by Nato air strikes, claim they have driven back soldiers loyal to Libyan leader Col Muammar Gaddafi.
The port is a vital lifeline, permitting aid deliveries and refugee evacuations, but they have been interrupted by the fighting - prompting residents to warn that supplies of food and water are dwindling.
For some two months, Misrata has been besieged by Col Gaddafi's forces, and rights groups say hundreds of civilians have been killed in the crossfire.Continued
at April 28, 2011