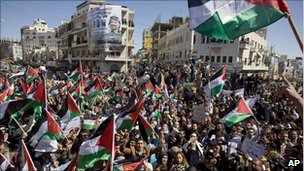 Israeli officials have criticised a reconciliation deal between rival Palestinian factions, Fatah and Hamas.
The foreign minister, Avigdor Lieberman warned that Israel would not negotiate with the new unity government.
The US also responded coolly, saying the government that resulted must recognise Israel and renounce violence.
Under the agreement brokered in Egypt on Wednesday, an interim Palestinian government will be formed and a date fixed for elections.
Palestinians hope the move will end infighting that was politically damaging and caused hundreds of deaths.
The Fatah party of the Palestinian Authority President Mahmoud Abbas - which runs parts of the West Bank - and Hamas, which governs Gaza, have been divided for more than four years.
Their surprise deal, announced and brokered in Cairo, came after months of failed rounds of talks.

The significance of the agreement is that... hundreds of terrorists will flood the West Bank and therefore we need to prepare for a different situation,”

End Quote Avigdor Lieberman Israeli Foreign Minister
"It needs to be clear that such an agreement crosses a red line," Mr Lieberman told Israeli military radio on Thursday.
"The significance of the agreement is that... hundreds of terrorists will flood the West Bank and therefore we need to prepare for a different situation," he added.
He threatened measures to restrict the freedom of movement of Mr Abbas and the Palestinian Prime Minister Salam Fayyad and freeze the transfer of taxes collected by Israel for the PA.
Earlier the Israeli Prime Minister, Benjamin Netanyahu, warned that the PA could not have peace with both Hamas and Israel.
"I hope the Palestinian Authority will make the right choice - peace with Israel," he said.
Hamas has carried out bombings and rocket attacks against Israel for years and does not recognise its right to exist.
Public pressure Thousands of Palestinians protested in Gaza this month, calling for reconciliation.
The protests were inspired by uprisings elsewhere in the Middle East and North Africa. Further demonstrations were planned for 15 May.
The split between Fatah and Hamas occurred when violence erupted a year after Hamas won Palestinian elections in 2006. Hamas seized control of Gaza in 2007.Continued
at April 29, 2011