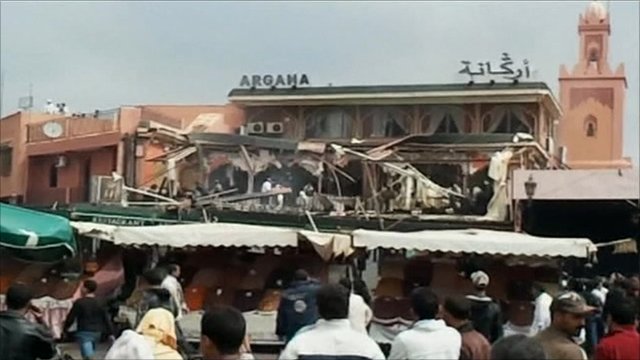 A bomb attack in the main square of the Moroccan city of Marrakesh has killed 15 people, at least 10 of them foreigners, officials say.
The blast wrecked the Argana cafe in Djemaa el-Fna square, a popular tourist spot. At least 20 people were injured.
The nationalities of those killed were unclear but French news agency AFP said six were French and three Moroccan.
The last major attack in Morocco was in Casablanca in 2003, when 45 people, including suicide bombers, were killed.
'Cruel and cowardly' Moroccan government spokesman Khalid Naciri told French television that Thursday's casualties involved a number of nationalities but he would not confirm any as yet.
The interior ministry discounted initial suggestions the blast could have been a gas explosion.
"We worked... on the hypothesis that this could... be accidental. But initial results of the investigation confirm that we are confronted Continued
at April 28, 2011