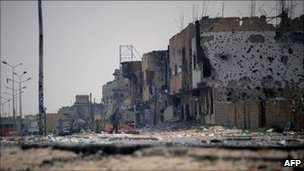 Misrata has come under attack by Libyan government forces attempting to retake the besieged city.
Three people were reportedly killed as missiles slammed into the city's port, a lifeline for those seeking to escape to the rebel stronghold Benghazi.
Nato is enforcing a UN resolution to protect civilians in Libya amid a two-month revolt inspired by other uprisings in the Arab world.
The UN Security Council is meeting to discuss a statement on the unrest.
Proposed by the UK, France, Germany and Portugal, the draft statement condemns the deadly violence against Syrian civilians and backs a call made by Ban Ki-moon for a "transparent" independent investigation into the deaths.
A Nato air strike earlier damaged Col Gaddafi's compound in Tripoli.
That attack followed big explosions at the Libyan leader's sprawling Bab al-Azizia compound early on Monday, which government spokesman Moussa Ibrahim called "an attempt to assassinate the leader and other political leaders of this country".
The Tripoli strikes have sparked angry criticism from Russian Prime Minister Vladimir Putin, who said the Western coalition had no mandate to kill Col Gaddafi.
US Defence Secretary Robert Gates on Tuesday denied the alliance was trying to assassinate Libya's leader. He was speaking at a Washington press conference with UK Defence Secretary Liam Fox, who said it was clear that the Libyan regime was "on the back foot".
"[Col Gaddafi] is a liability for his people and his country and the sooner that he gets this message, the better," Liam Fox.
He also decried Libya's use of young mercenary soldiers on the front lines, saying it was a "sign of desperation from a regime that they resort to these sort of tactics".
Deadly shelling The rebel-held city of Misrata has been besieged by government forces for two months, during which time parts of the city have had neither electricity nor water. Continued
at April 26, 2011