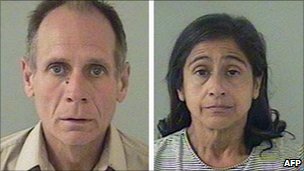 A California couple have pleaded guilty to charges of kidnapping and raping a girl when she was 11, and holding her captive for 18 years.
Phillip Garrido, who had two children with his victim Jaycee Dugard, and his wife Nancy earlier pleaded not guilty.
Phillip Garrido could be sentenced to 430 years in prison while Nancy faces 36 years in prison.
Ms Dugard was kidnapped from near her home in South Lake Tahoe in 1991 as she walked to a school bus stop.
She was kept with her two daughters, now 13 and 16, in the backyard of the Garrido home in Antioch, California, in a compound of tents and sheds.
As part of the deal the Garridos made with prosecutors, both waived their right to appeal.
They are scheduled to be sentenced on 2 June.
'Courage' Phillip Garrido pleaded guilty to 14 charges of kidnapping and sexual assault.
Nancy Garrido pleaded guilty to one charge of kidnapping and one charge of rape.
Their change in pleas means Ms Dugard and her children do not have to testify at a trial.
District Attorney Vern Pierson paid tribute to Ms Dugard.
"Jaycee's courage and willingness to confront her abductors in court directly led to the defendants' plea and life sentences," he said.
Police in California came under fire after Ms Dugard's discovery and freedom in 2009 because Phillip Garrido had a previous conviction for rape, involving an abduction, and was on the sex offenders list.
Ms Dugard was freed after police officers at the University of California at Berkeley saw Garrido on the campus with her and her children and became suspicious.
They contacted Garrido's parole officer and he was detained at a parole hearing.
Ms Dugard has received a $20m (£12m) settlement from the state of California, which has acknowledged repeated mistakes in the monitoring of Phillip Garrido.
at April 28, 2011